According to Mercy Lambo, Khafi is trying so hard to be Tacha, but cannot reach that level. 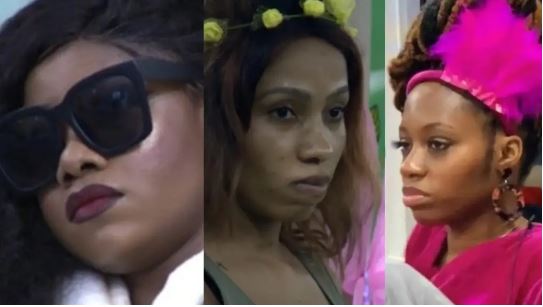 Tacha, Mercy and Khafi
Big Brother Naija, BBNaija housemate, Mercy on Saturday night blasted Khafi.
Mercy, during a chat with Diane after Saturday night party, lamented Khafi’s recent attitude towards housemates.
According to her, Khafi is trying so hard to be ‘Tacha’ but cannot reach that level.
She added that her trust and likeness for Khafi had reduced following her recent attitude which Mercy described as ‘agressive and manipulative’
Mercy told Diane: “Khafi is so aggressive these days, she is trying to be Tacha but can’t be.
“Tacha is a real nigga that does not have emotions.
“Khafi is a low budget Tacha, she is trying to migrate to that level from Wallgako to agama lizard.
“Now I can see what Gedoni was saying that she is manipulative. I overrated Khafi over Venita but not anymore
“Just four weeks left in this house and true colours are coming out. I hope the person that wins N60m is worth it.”
Watch the video below: