Three students and some policemen were said to have been injured and their rifles seized during the fracas. A police vehicle was also burnt. 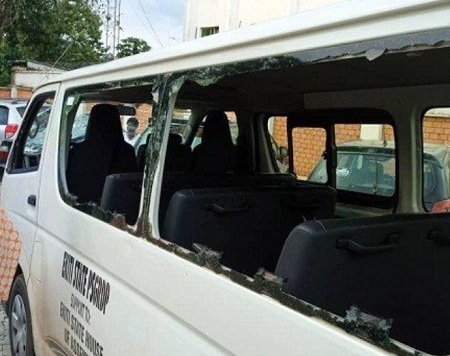 One of the vehicles destroyed by the students
The Management of Federal University Oye-Ekiti (FUOYE) has sent students home following their protest against epileptic power supply by BEDC that led to them attacking the convoy of Governor Kayode Fayemi’s wife, Bisi.

In a statement, the University noted that the students blocked the Abuja-Ado and Ijan -Ikole highways  from early Tuesday till 2pm before they were dispersed.

However, they later regrouped and attacked the convoy of Mrs Fayemi, destroying some cars in the process.

Three students and some policemen were said to have been injured and their rifles seized during the fracas. A police vehicle was also burnt.

In a statement, the Vice Chancellor, Prof Kayode Soremekun, condemned the protest and announced the school’s closure and proscription of the Student’s Union till further notice.

The statement reads: “We hereby condemn the violence that has  followed the  protest by the students of FUOYE to register their pleasure on the epileptic power supply from BEDC to the communities of Oye and Ikole.

“Our findings revealed that the students gathered themselves and blocked the Abuja-Ado,and Ijan -Ikole High ways  from the early hours of today, September 10, 2019 till about 2pm.

“Thereafter, after much persuasions by the University ‘s internal security personnel  and  the federal security agencies, they dispersed.

“Only for the news to get to the university authority thereafter  that the students assaulted the convoy of Her Excellency, the wife of the Governor of Ekiti State, Erelu Bisi Fayemi and vandalized some vehicles in the convoy.

“Sensing that her Excellency was under attack in view of the continued aggression of the students,the  security personnel attached to her convoy had to repel the attack and some students were injured in the process.

Some Policemen also sustained injuries and their rifles were also seized.

“As at this evening,, three students were injured with two of them having minor injuries and one having a severe abdominal injury and is currently hospitalized  at The Ido Federal Medical Centre.

“In view of the foregoing, management at an emergency meeting discussed and reviewed the unruly behaviour of the students.

“Such behaviour which included   the destruction of vehicles and burning of a police van as well as threat to lives has compelled the University management to take the following decisions:

The University is hereby shut down with immediate effect.

Students are therefore ordered to vacate the university premises on or before, Wednesday, Sept 11, 2019.

The students Union is hereby proscribed.

More details will be made known in due course.
Top Stories