Ever since the beginning of the 2019/20 campaign, striker Abraham and defender Tomori have proved to be key players for the West London club. 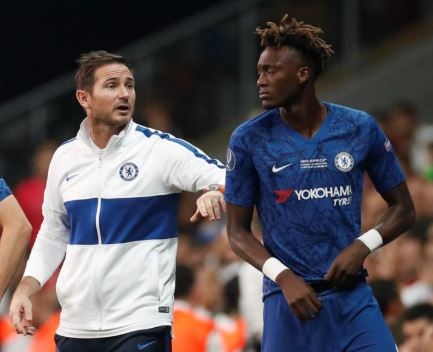 Premier League giants Chelsea have been reported to be close to handing Reece James, Tammy Abraham and Fikayo Tomori a new contract, as they come close to sealing Callum Hudson-Odoi to a big-money contract.

Report coming from the Express, claims that the 18-year-old winger has come very close to signing a new deal with the London club, one that could see him earn up to £180,000-a-week, as the club started negotiations over a new contract with Emerson Palmieri.

With that still yet to be settled, Chelsea boss Frank Lampard wants the club to agree on new contract extension with more players, with Abraham, James and Tomori said to be among the several players as Lampard have formerly expressed his plans for them in his team. Frank Lampard and his team will have a though season backed by most football tips.

The Blues are unable to bring in any new players until the next summer all thanks to their imposed transfer ban placed by FIFA, but that will not be stopping the London club from tying down the mentioned players, who are all linked with a move away from the club, to a new contract as they won't be able to sign replacements for them should the players leave in January.

Ever since the beginning of the 2019/20 campaign, striker Abraham and defender Tomori have proved to be key players for the West London club so far, with the forward having four goals to his name in four Premier League appearances this season. Something football predictions hoped for to happen.

Reece James and Hudson-Odoi, who are both still on the sidelines for the club, should have no problem slotting into the first team alongside their academy teammate Abraham once they return from their injuries due to their impressive play last season. And handing the duo, who will be key in the team, a new contract will turn out to be a good decision.

Should the blues be able to pull off agreeing on new contracts with the players, it'll will prove to be a great boost for the club and its future, which could see big European clubs coming to try sign the players from Stamford Bridge.
Top Stories