Shocker! Man Throws Son From A Bridge Into A River, Then Goes To Sit In A Pub


In what will come across as a really heartbreaking development, a man has killed his own son in a really devastating manner. 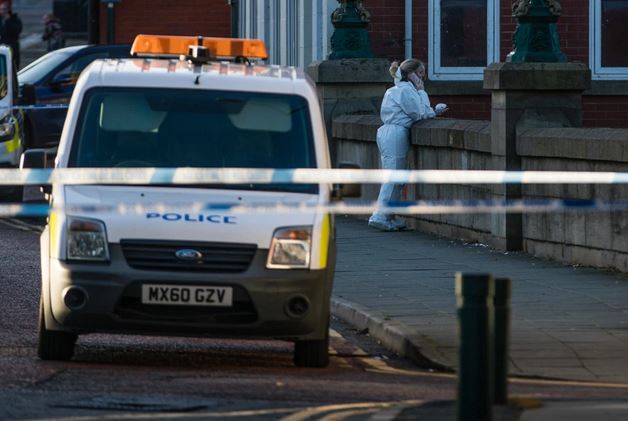 Forensic officers examined the bridge after the baby was plucked from the water
A baby has died after being thrown into a river from a bridge before his suspected killer walked into a nearby pub and sat down among regulars.

A 22-year-old man - understood to be the 11-month-old boy's dad - was arrested inside the Lock Keeper pub in Radcliffe, Greater Manchester, at around 4.30pm yesterday.
Horrified eye-witnesses said the baby was thrown in a Moses basket off the bridge to his death.

According to locals, the man then walked into the pub and asked if he could sit down.
He was arrested inside the pub minutes later after cops were called.

Paramedics battled to save the little boy after firefighters pulled him from the water around 100 yards from the bridge.

The tot was rushed to hospital but pronounced dead shortly after arrival and a murder investigation has been launched.

Local residents expressed their horror and said onlookers were left in tears.

The daughter of a barmaid at the Lock Keeper said the suspect "came in and asked for a drink but said he had no money."

She added: "Then loads of people came in screaming that there’s a baby in the river.

"He sat there and stared, he didn’t move so the police were phoned and he just told a customer that he’d thrown his baby in the river.”

Anastasia Ward,  who lives next to the bridge said: “I saw the mum walk past with the baby around 4pm."

Two fire engines, ambulances, police cars and a police helicopter were scrambled to the scene as a huge emergency response was launched near the town centre.
***
Source: The Sun UK
Top Stories

Drama As Man Goes Wild, Stabs His Own 20-Year-Old Sister To Death During An Argument
Recent Stories