A former lawmaker, Shehu Sani has ridiculed Governor Nasir El-Rufai over reports that he enrolled his son in a public school. 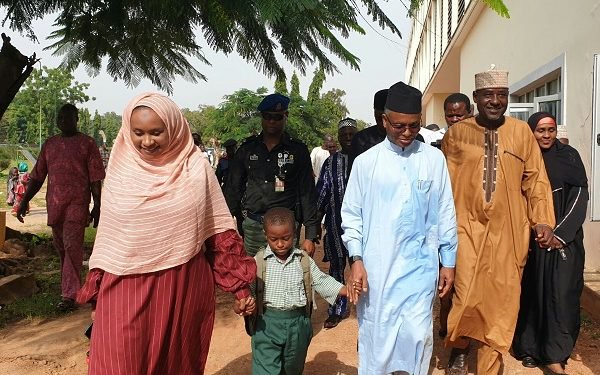 El-Rufai taking his son to school
The Immediate past Senator who represented Kaduna Central in the 8th Senate, Senator Shehu Sani, has described Governor Nasir El-Rufai’s enrolment of his son in a public school as a political stunt for 2023.
He said the action is clownish, comical and deceptive while addressing journalists in Kaduna, Senator Sani said, “His action was simply a 2023 political stunt set up for the media and people who reside outside Kaduna.
“For people who reside in Kaduna, they know what public primary school look like in the state, they know where they are located and the problems they are facing.
“It is not because I have a political difference with him, no, but for whoever lives in Kaduna state knew that what the governor did with his son by enrolling him into public school was just a comedy.
“It was a badly written Kannywood or Nolywood script. I know the governor likes Kannywood and Nolywood actors and actresses, but as far as l am concerned, that was a bad and poorly written script for the media in preparatory for 2023 and nothing else.
“He would have done better by upgrading schools in Kaduna, you cannot spend N195m in a particular school and then take your son and the media to that school and think you have done anything different.
“Let me tell you, we had a governor in this state, Balarabe Musa, who has never lived in government house during his reign and all that while he was a governor he lived in his private house and I also know that the children of former governor Ahmed Makarfi attended this same Capital School. I also know that other public officials’ children go to that school too. So if you are not been corny, deceptive and comical, you would have allowed all your children to enrol into public schools. Public school doesn’t mean primary schools alone, there are public secondary schools and public universities.
“We have Kaduna State University, KASU which is a public University and we have several public secondary schools in the state. During Sallah, we saw the governor with a lot of his children and all of a sudden, you picked one of them and said oh, take him to Capital School, I think the governor is becoming a bad representation of Baba Sala, I Go Die and Basket Mouth, a kind of comedy situation. He is not new in this kind of drama. It was the same person who was moving around Kaduna—Abuja road and he went with cameras that he was chasing kidnappers, so this is a new script but as far as am concerned, that is comedy.
“Since we are in an era in this state of using public utilities, public hospitals,and now public schools, so it is also in order that public officials, both elected and appointed should also patronise public toilets in Kaduna. That is the highest form of patriotism and selfless service. You should use what the masses are using which is public toilets.
“As a governor of the state and as a leader, if it is good to patronise public schools by public servants, politicians and all of us should patronise public toilets like the one that is not far away from my office.”
Top Stories