Nigeria's Vice President, Yemi Osinbajo has been challenged by Femi Fani-Kayode to resign and face Timi Frank, man to man. 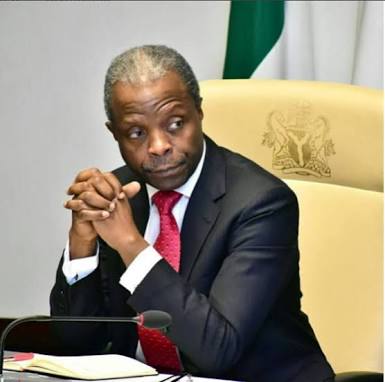 VP Yemi Osinbajo
A former Aviation Minister, Femi Fani-Kayode has dared Vice President, Yemi Osinbajo to prove he is man enough by resigning and facing probe for allegedlly collecting N90bn from Federal Inland Revenue Services, FIRS, for 2019 election.
Fani-Kayode asked him to answer questions on allegations leveled against him by the former Deputy spokesperson of the All Progressives Congress, APC, Timi Frank.
He dared Osinbajo to face Frank “man on man.”
Mocking Osinbajo, the PDP chieftain said Frank “will eat you for breakfast.”
Recall that Frank had alleged that the Federal Inland Revenue Services, FIRS, had released the N90bn to the Vice President, Yemi Osinbajo for the 2019 general elections.
The political analyst had alleged that Osinbajo’s ongoing travails was allegedly due to corruption and had nothing to do with 2023 politics.
He had claimed that he has reliable information from his sources in the presidency to the effect that Osinbajo’s travail has nothing to do with 2023 but alleged mismanagement of about N90 billion Naira released by the Federal Inland Revenue Service (FIRS) to prosecute the last general elections in favour of the APC.
But, FIRS had denied the allegation, saying it did not make N90 billion available to Vice-President for election campaign.
It accused Frank of seeking cheap popularity while threatening that it would file a libel suit if he refuses to tender an apology in three major newspapers within the next 24 hours.
But, Osinbajo, in his response yesterday declared his readiness to be probed, saying he was prepared to waive his constitutional immunity aside to allow for proper investigation.
However, Fani-Kayode in a tweet wrote: “If you are really a man don’t just waive your immunity to sue Timi Frank but RESIGN from your position and take him on man to man. He will eat you for breakfast. I know that young man: he is a real Ijaw! Deeply courageous and tough as nails. You cannot intimidate him or break him.”
Top Stories