Babajide Sanwo-Olu, said Osinbajo had continued to discharge his official duties despite the ongoing controversy. 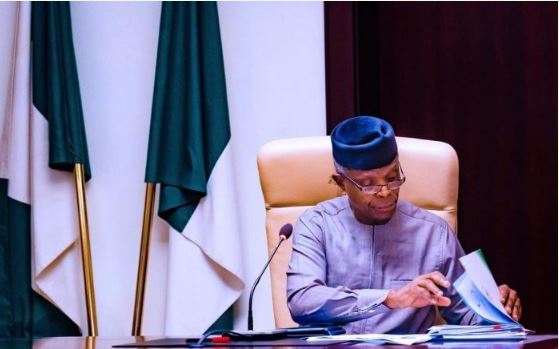 VP Yemi Osinbajo
Governors of the ruling All Progressives Congress (APC) under the aegis of Progressive Governors Forum (PGF) yesterday said an alleged crack in the presidency over Vice President Yemi Osinbajo “only exists in the realm of gossips”.
The Co-Chairman of PGF Media and Communication Steering Committee and Governor of Lagos State, Babajide Sanwo-Olu, said Osinbajo had continued to discharge his official duties despite the ongoing controversy.
Sanwo-Olu, who was represented by his deputy, Babafemi Hamzat, spoke at the inauguration of the committee yesterday in Abuja. The chairman of the committee and Governor of Kaduna State, Malam Nasir el-Rufai, was represented by his Special Adviser on Media and Communications, Mr Muyiwa Adekeye, at the meeting which was attended by APC National Publicity Secretary, Malam Lanre Issa-Onilu, as member.
“There is no crack. It is in the realm of gossips. By the time they said that, the vice president went to Zimbabwe to represent this country. It was the prerogative of the president but he nominated him. “Like I said earlier, it is in the realm of gossips because only on Wednesday, the vice president presided over the Federal Executive Council (FEC) meeting, the highest decision making body in the country.
“So, we don’t listen to rumour. We deal with facts and the fact is that they are working together. So, it is all rumour and don’t take it that serious,” said Hamzat.
On the role of the committee, the Lagos State deputy governor said it was constituted to support the governors to achieve the vision of rolling out progressive public/media engagement initiatives in all APC states.
He said it was a testimony of the governors’ commitment to issues of citizens’ participation as the necessary credential for the expansion of democratic space.
Top Stories