School Teacher Beats Pupil To A Pulp In Ogun


A school teacher in Ogun State has found himself on the wrong side of the law after he was alleged to have brutalised a pupil. 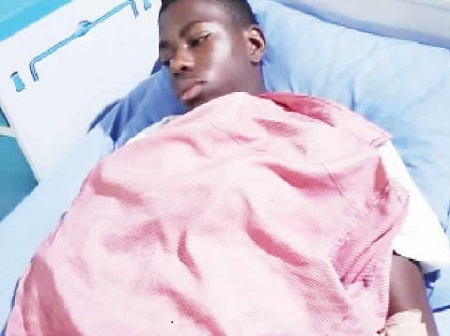 PUNCH Metro learnt that the teacher, who is also the school chaplain, allegedly beat David for walking slowly in the chapel.

It was gathered that David, who was beaten with a belt by the teacher, fell unconscious and was rushed to hospital, where he spent three days before he regained consciousness.

The victim’s sister, Love Onos, however, took to her Instagram page to lament David’s ordeal.

She said, “This is child abuse… a teacher at the Faith Academy flogged my brother then hit him in his chest; he collapsed and was rushed to hospital and was unconscious for three days. At this point, what my brother did or did not do is not valid; no man has the right to treat someone else’s child like that, not to talk of the fact that the child is placed under their custody with so much trust.

“On top of that, I called the principal and he lied to me that my brother was not in hospital and that he was fine, not until my parents got to Ota and found him in hospital. I am a mother of two and know the value of children, plus we have videos of pupils testifying to this teacher hitting and slapping them all the time; we chose not to put the video out to protect the interest of these kids. So, guys, please help me re-post, let’s get justice for David.”

When PUNCH Metro contacted Onos, she noted that her parents were unaware of the incident until David reached out to them when he regained consciousness.

She said, “The pupils were in the chapel for service when the chaplain told my brother to come and sit in front. My brother was walking to the front when the teacher took off his belt and started beating him and pushed him in the chest, claiming that David was walking too slowly.

“My brother fell and was unconscious for three days and the principal hid it from us until David regained consciousness and begged the school driver, who brought food for him, to use his phone to contact my parents. Other pupils also testified that that was how the teacher used to beat them. We want justice to prevail in this matter.”

PUNCH Metro learnt that the matter was reported at the Onipanu Police Station.

The state Police Public Relations Officer, Abimbola Oyeyemi, who confirmed the incident, told our correspondent that the parties involved had decided to resolve the issue between them.

He said, “It is a case of a teacher, who allegedly beat the pupil, and according to the teacher, he flogged the boy as a corrective measure, but unfortunately, the belt he used injured the boy in the head.

“Notwithstanding, investigation is still ongoing; the police are only waiting for the outcome of the discussion among the parties involved and the outcome will determine the next step the police will take.”

When PUNCH Metro contacted the Principal, Faith Academy, Olumuyiwa Shopitan, he declined to comment on the incident.

“We will get back to you because I am not authorised to speak to the press, but those who have the authority will speak to you,” he simply said.
Top Stories