Your Tenure Was A Great Setback For Lagos - Group To Ambode


The concerned group pointed out that, "statistics had shown that the state suffered 17% economic depression through lack of prudence and disregards for due process." 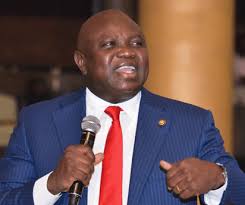 Mr. Akinwumi Ambode
A socioculturaland political group, Yoruba Radical Assembly (YRA), has taken a critical look at the immediate past administration in Lagos State under Mr. Akinwumi Ambode and declared that it was a great setback to the people of the state.
The group at a press conference addressed by its General Secretary, Mr. Omolola Bamidele Olukayode in Lagos on Wednesday lamented that, the administration was a fiasco and a monumental disaster.
According to Olukayode, it was a sad experience for the people of the most revered and most primed state in Yoruba land, regretting that, “we wish such an encounter with that failed administration never happened in the annals of our life.”
The concerned group pointed out that, “statistics had shown that the state suffered 17% economic depression through lack of prudence and disregards for due process.”
In addition, the group stressed that, lack of respect for cultural institutions, total disregard for men of God and desecration of the Yoruba core values was the order of the day under the immediate past governor.
“We therefore call on all Yoruba sons and daughters, leaders of thoughts, all Yoruba self determination organisations as well as all the 20 million Lagos residents to come together to push back the state on track because we had never had it so bad.

“We also enjoin our respected traditional rulers, other elder statesmen like Asiwaju Bola Ahmed Tinubu to join hands with the current administration of Babajide Olusola Sanwo-Olu to make Lagos work again,” the group pleaded.
The group also has a word of advice for Ambode by enjoining him to look back with a view to making amends about various allegations being leveled against him, asserting that, nobody is clever enough to escape nemesis.
“The move by Ambode to be most prominent politician in Lagos has failed and the sooner he realises this, the better. The allegations in the public domain of his misgovernance are heavy. So we will join every legitimate efforts initiated by individuals or organisations to ensure justice is served and seen as being served.

“We are in an era where public funds in the possession of corrupt public officers directly or indirectly are checked out and retrieved. Our Lagos must continue to rise, Yoruba land, our fatherland must continue to rise,” the group stressed.
In conclusion, the group restated its commitment to constantly defend the interest of Yoruba all over the world, enthusing that, Lagos has now been liberated from desecration and warned that nobody would be allowed to retard its development and growth that had commenced under the current dispensation under Sanwo-Olu.
A sociocultural
https://dailytimes.ng/group-to-ambode-your-tenure-was-a-great-setback-for-lagos/
A sociocultural
https://dailytimes.ng/group-to-ambode-your-tenure-was-a-great-setback-for-lagos/
Top Stories