One of the former students of the University of Lagos has made a new revelation about the #SexForGrades lecturer. 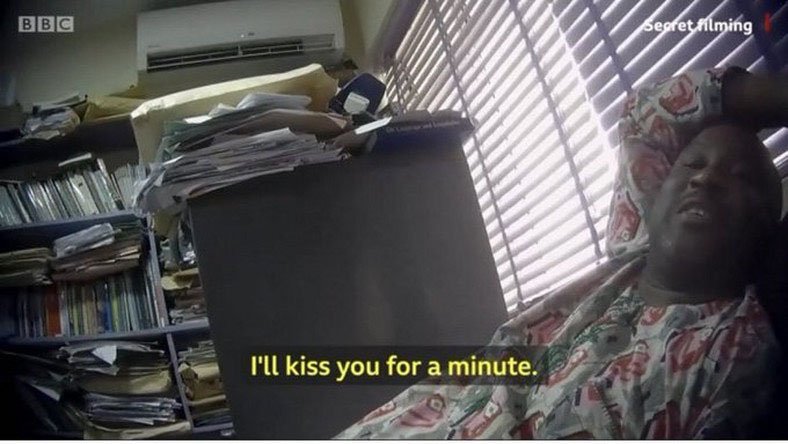 Dr Boniface Igbeneghu
When a lecturer in the Department of European Languages and Integrated Studies, University of Lagos (UNILAG), Dr Boniface Igbeneghu, met a ’17-year-old’ and made amorous advances at her, it never occurred to him that she was trouble. He woke up trouble. Now, he will find sleeping a Herculean task.

A secret video recording gave the lecturer away as one of those fond of inappropriately taking advantage of female students.

The BBC Africa Eye video titled “Sex for Grades” has led to Igheneghu’s suspension from the university and restriction from the UNILAG academic area until a probe into his activities has been concluded. A female undercover reporter posed as a 17-year-old admission seeker to spill Igbeneghu’s secret.

Igheneghu, who was also head pastor of a branch of the Foursquare Gospel Church in Nigeria, has been asked by the church to step down from ministerial duties as a result of his “unscriptural behaviour” in the video.

The video was part of BBC Africa Eye documentary which exposed the unethical sexual harassment practices of randy lecturers in two popular West African universities (UNILAG and the University of Ghana).

In the video, Igheneghu promised to help the ‘17-year-old’, who approached him for help, with admission if she was obedient.

But from their first meeting for ‘tutorials’, Igheneghu began to reveal sinister intentions.

He said: “How old are you? 17, and you look very big like this? Don’t you know you are a beautiful girl? Do you know that? You are not beautiful; you are a very beautiful girl. Do you know I am a pastor? And I am in my 50s. What will shock you is that even at my age, if I want a girl of 17, all I need is to sweet-tongue her; give small money and I will get her.”

During a second meeting, Igheneghu prayed with the girl “to lead her to Christ”.

He directed her to repeat after him: “Lord Jesus Christ; confess the Lord Jesus Christ; I accept that you are my Lord and saviour. Guide me and direct me. Thank you, Jesus. Don’t worry about your admission. I will work on it.”

He soon moved to ask about her sex life and told her to keep their escapades secret from everyone.

When the girl asked what he meant by knowing men, he said: “Have you started having sex? Look anything that we discuss, you are sure that your mother will not hear?”

During another meeting, Igheneghu told the reporter about a place lecturers take their prey for sexual escapades at the UNILAG Staff Club.

He said: “There is an upper part of the staff club where lecturers carry out their deeds…they call it ‘cold room’.”

He also said such students are favoured with good grades – the benefit of being with the lecturer.

During that meeting, Igheneghu told the reporter to kiss him after locking the door and switching off the light in his office.

“Do you want me to kiss you? Lock the door; I will kiss you for a minute.”

The girl asked: “Did you lock the door?”

He asked her to come closer.

He concluded: “I can call you to come any day; if you don’t come, then you know you are gone. I will tell your Mom you are disobedient.”

In the video, two alumnae of UNILAG said they were abused by Igheneghu.

The first victim said: “He will tell you to come to his office. He will lock the door. Sometimes, he will want to grope you; sometimes, he will dry hump you. He likes to pick on struggling students because he knows that they are very vulnerable and there is nothing they can do.”

The second victim said: “I never ever gave my consent once. There was a time he was preparing for Bible study, and he was groping me and he was writing down scriptures.”

The video also noted that one of the victims said she attempted suicide four times after graduating following repeated abuse by Igheneghu.

UNILAG and the church’s response

In the university’s statement, its management noted that Igheneghu would be probed by an investigation panel.

It reads: “The University of Lagos Management today suspended Dr Boniface Igbeneghu of the Department of European Languages and Integrated Studies, Faculty of Arts who was caught in a sting operation by the British Broadcasting Corporation (BBC) titled “Sex for Grades”. The trending video chronicled cases of sexual harassment of female students by some lecturers in some West African Universities including the University of Lagos.

“Management at its emergency meeting of October 7, 2019, suspended Dr Igbeneghu from work immediately and barred him from the University academic areas while the suspension subsists unless invited by a Panel constituted by the University to investigate the matter.

“In addition to this, the University Management has ordered the shutdown of the Staff Club “Cold Room” mentioned in the documentary for further investigation. The so-called “Cold Room” is a Functions Room that may have been abused because this is a deviation from the purpose for which it was created (meetings, seminars, events, etc.).”

The statement further added that any other lecturer indicted once the full BBC Africa Eye video is released would be suspended and probed, describing the scandal as embarrassing.

“The University assures members of the public that any other lecturer mentioned in the full version of the operation which is to be aired later today will also be suspended to ensure a proper investigation is carried out.

The institution further urged students to come forward if harassed.

The Foursquare Gospel Church in Nigeria, where Igbeneghu was a head pastor, has also asked the lecturer to “step down from all ministerial assignments.”

In a statement by its National Secretary, Reverend Ikechukwu Ugbaja, the church noted that it does not tolerate sexual harassment, which it described as “heinous and unscriptural”.

The statement reads: “The General public is hereby informed that as a holiness and bible believing church, we do not condone such heinous and unscriptural act among our ministers. We totally dissociate ourselves from the purported conduct of Dr Igbeneghu and promise to take appropriate measure as soon as the ongoing investigation is concluded.

“Meanwhile, the pastor in question has been asked to step down from all ministerial assignments.”

The Pro-Chancellor and Chairman, Governing Council of the University, Dr Wale Babalakin, said the Council would investigate allegations of sexual harassment against a lecturer exposed by a documentary, “Sex for Grades”.

“I have not seen the BBC report but I got wind of it early this morning. I can say on behalf of our Council that there is zero-tolerance for sexual harassment. We will investigate the matter thoroughly and anyone found wanting will face the consequences according to the laws of the University. Students must not be made to suffer for anything and your marks must be directly commensurate to your performance. Any other thing is not scholarly and would not be tolerated,” he said.

Lecturers and students of UNILAG condemned the sex-for-grade scandal, noting that the culprit should be punished according to the laws of the university and the country.

He added one major challenge facing efforts at stamping out such a scandal was the reluctance of victims to speak up when sexually harassed.

Ashiru said: “The bane lies in the reluctance of victims to come forward and speak up. It is sad, unfortunate and indecent. We condemn in strongest terms this type of unethical practices by any of our members. There are many of such unethical practices in the society and we can’t insulate the university from such.”

Continuing further, he said: “The matter must be investigated and culprit dealt with in accordance with the laws of the university and the land.”

Proffering solutions to avoid recurrence, he said errant members should be sanctioned, while effective mechanisms should be put in place for victims to speak up without fear of attack.

Students, who spoke to The Nation on condition of anonymity, also condemned the act, which they said should be stamped out in the country’s tertiary institutions.

An alumna of the University (names withheld) said Igheneghu had been harassing students for up to 10 years.

“The guy was notorious even when I was in school 10 years ago. So he hasn’t stopped! Imagine!” the law graduate told The Nation.

All eyes will be on the university’s probe panel. The end certainly has not been heard of the matter.
Source: TheNation
Top Stories