Bayelsa: 5800 APC Members Defect To PDP Ahead Of Governorship Election


Speaking on behalf of the decampees, prominent politician,Pastor Miebi Bribena regreted leaving the PDP for the APC which he described as a party of visionless characters . 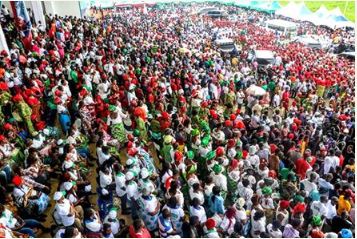 Some of the defectors, PDP
Over 5,850 leaders and supporters of the All Progressives Congress have defected from the party to the Peoples Democratic Party.
Majority of the defectors led by a prominent leader and most vociferous defender of the APC in Bayelsa, Pastor Miebi Biribena are from the Southern Ijaw and Sagbama Local Government Areas òf the state.
A statement by the Chief Press Secretary to the Governor, Mr. Fidelis Soriwei stated that the APC members came out in large numbers to dump their brooms, the symbol of their party for the PDP’s umbrella during the official flag off of the PDP Gubernatorial campaign in Bayelsa in Yenagoa.
Other notable APC Chieftains who defected to the PDP with their teeming supporters include,Chief Ezekiel Youngbo, other notable APC Chieftains, Dinini Dorgu and Abel Sikpi.
The PDP was forced to change the venue of the rally from the Peace Park to the massive Ox Bow Lake Pavillon because of the unprecedented crowd that defied the rain to be part of the rally which disrupted activities in the city.
Speaking on behalf of the decampees, prominent politician,Pastor Miebi Bribena regreted leaving the PDP for the APC which he described as a party of visionless characters .
He assured the PDP that he and his supporters would deliver the entire Sagbama local government area for the PDP without opposition from his former party.
“I am a son of the soil from Agbere in Tarakiri Kingdom in Sagbama local area. Some years ago, the Governor said to me ‘Arc Bribena you are young and vibrant, when I listened to you on radio, you are a solid material. But Chief fred Agbedi is our prefered candidate and we are working for him to be re-elected. So allow him to go.
“Instead of listening to my head, i listened to my emotions. He told me, ‘i have seen potentials in you, if you had come earlier to indicate your interest with what i heard of you on radio, i would have allowed you to go and contest for House of Assembly and start from there. But I refused to listen and my emotions took the better of me and i said I was going to stand against all that represented Dickson.
“So for those years, I strayed into a party of strange bedfellows. In the APC, they have no aims and objectives. They don’t have a vision and a mission statement. They don’t have a modus operandi. What they know how to do is jamboree and road blocks. As a Pastor, i can’t continue with a system like that. So for the forthcoming election, let me assure you that PDP has one hundred percent support in Agbere community and the entire Sagbama local government area,” He said
In his remarks, the Governor òf Bayelsa State, the Honorable Henry Seriake Dickson who thanked Bayelsans for their massive support to the PDP, stressed that the APC had failed to provide solutions to the myriad of problems plaguing the state.
He called on the Minister of State for Petroleum Resources, Chief Timipre Sylva to utilize his position to collaborate with the state government to br8ng the desired development to the state.
He urged him to give priority to the take off of the Brass Liquefied Natural Gas, Brass Fertiliser project and attract other major investments that could create jobs for the teeming youths.
Governor Dickson who cautioned the Independent National Electoral Commission and security operatives against any form of intimidation and manipulation, drew their attention to the overwhelming support the PDP enjoys in the state and stressed that the party would once again win with a greater margin in the forthcoming poll.
Also speaking the PDP flagbearer, Senator Douye Diri, assured that when elected, his administration would build on the solid foudation laid by Governor Dickson with emphasis on youth and women empowerment through deliberate measures to promote business growth in the state.
Senator Diri particularly noted that the three senatorial road projects would be completed to hit the Atlantic ocean where the state’s treasure lies.
The State Chairman of the PDP, Mr. Moses Cleopas urged party faithfuls to mobilize people in all the wards and local government areas to vote PDP in the upcoming election.
He restated his commitment to the Defence òf the Ijaw nation and the protection of its interest through the sustenance òf the struggle for resource control and the quest for better standard of living in the deprived region.
PDP National Vice Chairman, South South zone, Elder Emmanuel Ogidi, former Deputy Governor, Mr. Peremobowei Ebebi, former presidential aide to the former President, Dr. Goodluck Jonathan on Domestic Affairs Hon. Waripamowei Dudafa were also in attendance.
Top Stories