Horror! Policeman Kills 2 People At Burial Ceremony While Trying To Give Gun Salutes In Imo


A police officer has reportedly killed two people and injured others while trying to give gun salute in Imo. 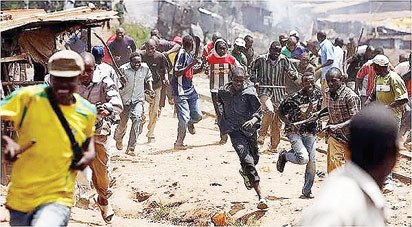 File photo
No less than two persons were reportedly killed and about seven others severely injured in a case of ‘accidental discharge’ by an officer of the Nigerian Police Force, The Nation reports.

The policeman who was not immediately identified, was said to be an orderly of one of the prominent indigenes of the town, Mr. Remy Chris Nwagbo.

It was gathered that the incident happened when members of the Ideato Committe of Friends went to the king’s Chambers to pay him a condolence visit.

According to community sources, members of the group were leaving the king’s chambere when they saw Nwagbo, who is also a member of Ideato Committe of Friends, and decided to accompany him to pay his own visit to the Eze.

“Before they made to move, they stayed to exchange pleasantries as members of the club. It was then that a police orderly guarding Remy Chris tried to give them some gun salutes.

“As he made to lift the gun up, it opened fire, destroying the jaws of the man exchanging greetings with Chris as well as injuring about seven other persons waiting to greet Remy Chris”, one of the sources told our correspondent.

The source added that the last person the bullet touched died instantly because the bullet blew his brains to smitterins while the other person was confirmed dead in the hospital.

The spokesman of state police command, Orlando Ikeoku simply responded ‘Get back to you please’ to a text message sent to him by our correspondent.

However, as of the time of filling this report, he did not get back as promised neither did the state commissioner of police, Rabiu Ladodo answer calls and messages sent to his phone.

But, a senior police officer told our correspondent in confidence that the officer had since been arrested and that he was facing orderly room trial.
Top Stories