Some very angry pensioners have blocked the gate to the Delta state government house, chasing away the governor's aides. 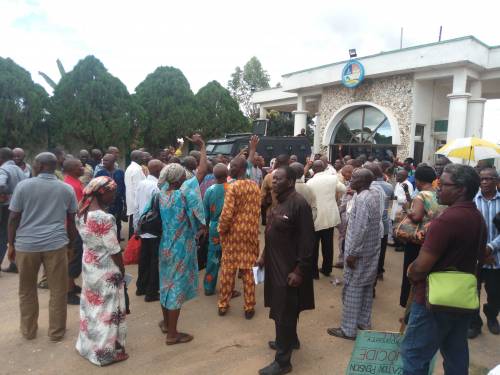 The aggrieved pensioners were protesting the non-payment of their pensions.

Edevbie, Okeme and Monye's efforts to speak with the protesters were unsuccessful as they were chased away by the placards-carrying pensioners.

The protesters insisted Governor Ifeanyi Okowa must be the one to address them.

Chairman of the ACR, Avurakoghene Agbaka, said, "Our major problem is government delay to correct the disadvantaged position we are placed by the use of obsolete N7,000 to calculate our terminal benefit, instead of N18,000 which the retirees earned before they retired into the scheme.

"Full implementation of the scheme commenced on 1st Match, 2010 when the first set of retirees were churned out and that was when the National Remuneration mode N18,000  minimum wage came into force.

"The issue of correcting the anomaly has been  dialogue with government for the past seven years and till date, it is inconclusive. Many of us have died without receiving their benefit out of frustration while most us are sick and bed ridden arising from delay of non payment."

Also speaking, the association's Vice Chairman, Anthony Osanekwu, stated, "The decision of the state governor to pay us according to the N7,500 minimum wage is a breach of the pension law, we retired with the N18,000 minimum wage, and the law of pension says you should be paid based on salary which you retired."
Top Stories