Some students who claim to have been abused in their academic institutions have spoken out on social media in the wake of the sex-for-grade scandal. 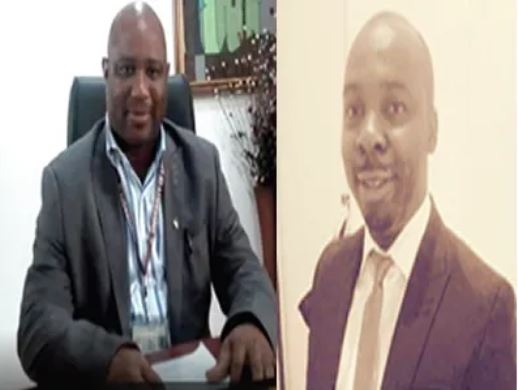 The indicted lecturers
Following the sex-for-grade scandal that rocked the University of Lagos (UNILAG) and the University of Ghana over the last 48 hours, some higher institution students and former students have called out lecturers on social media who allegedly molested them.

The BBC Africa Eye in a 52-minute documentary entitled: ‘Sex for Grades, Undercover in West African Universities,’ and anchored by investigative reporter, Kiki Mordi, revealed how students are sexually harassed in West African universities, showing UNILAG and the University of Ghana as examples.
Dr. Boniface Igbenegbu and Dr. Samuel Oladipo were screened from University of Lagos while Ransford Gyampo and Paul Butakor from University of Ghana were revealed as culprits in the documentary.
Calling out a lecturer on social media using his Twitter handle @ilivelike61, the user claimed he was sexually harassed by a gay lecturer who usually abuse male students of Faculty of Science at the Ekiti State University.

He wrote: “Mr… of Faculty of Science, Ekiti state University is gay and abuses male student, Brilliant or not he would call you to his office to touch your ***** and ask arrays of weird sexrelated questions, I really hope he is exposed #sexforgrades.

“The shameless man would *****and still fail you in his course cause you are a fine boy.

“Ya’ll were making it look like females were seducing lecturers, what was seductive in a 14-year-old boy just facing his studies? Was I busty?

“Well for those asking, I ended up dropping out due to bad CGPA and thanks to … for cutting my academic journey short.”
Corroborating the claim, another user @olubory, said his roommate was a victim of the said lecturer, adding that the lecturer failed his roommate twice.
@olubory wrote: “Very true. My best friend/roommate was a victim. He failed him twice and he had an extra year. There was a time he almost naked him in his office. It’s a long story dear.”
A former student of the department in question, @Tee__pearl611, said: “I graduated from the department, I know u are not lying but I didn’t say it is the truth too, they still have my transcript biko.”
Meanwhile, UNILAG said it had set up a panel headed by Professor Ayodele Atsenuwa, a professor of Public Law, Faculty of Law and the incumbent Dean of the Faculty to probe the allegation of sexual harassment of female students levelled against two lecturers by the British Broadcasting Corporation (BBC) Africa Eye.

This is contained in a statement issued yesterday by the Principal Assistant Registrar, Communication Unit, UNILAG, Mrs. Taiwo Oloyede. Oloyede said the panel would probe the allegations of sexual harassment levelled against Dr. Boniface Igbeneghu of the Department of European Languages and Integrated Studies, Faculty of Arts and Dr. Samuel Oladipo of the Department of Economics, Faculty of Social Sciences, as well as other related cases.
She said: “As previously announced in the University’s Press Release dated Monday, October 7, 2019, Dr. Samuel Oladipo who was featured in the full version of the BBC broadcast has been suspended from work with immediate effect and barred from the university academic areas until conclusion of the panel’s assignment.
“The university wishes to inform the general public that the panel set up to investigate another allegation of sexual harassment involving a professor in the university in June 2018 still subsists and awaits further information that will aid in concluding the investigation.

“Students and members of staff who have relevant information are encouraged to come forward. Their protection is assured.

“We firmly reassure all our students, staff, alumni, parents and guardians that this matter will be tackled with every sense of responsibility, and the seriousness it deserves. The whole process will be transparent and appropriate sanctions will be meted out to anyone found culpable.”
Also yesterday, the Senate revisited the sexual harassment bill which prescribes five-year jail term and N5 million fine for lecturers convicted for sexually harassing male or female students.

The bill was sponsored by Senator Ovie Omo-Agege (APC, Delta Central) in October 2016 and passed by the 8th Senate. According to the bill, an educator will be “guilty of committing an offence of sexual harassment against a student if he/she has sexual intercourse with a student who is less than 18 years of age; has sexual intercourse with a student or demands sex from a student or a prospective student as a condition to study in an institution, or as a condition to the giving of a passing grade or the granting of honour and scholarships”.

The bill prescribes that: “Any person who commits any of the acts specified in Section 4 of this Act is guilty of an offence and shall, on conviction, be sentenced to imprisonment of up to five years, but not less than two years without any option of a fine.”

The bill, however, suffered a major setback as it was not given Presidential assent after its passage by the 8th Senate. Some lawmakers, who were against its passage, had argued that it should be more inclusive and not discriminatory or targeted only at university lecturers. The reintroduced bill, which prescribes the five years jail term, is sponsored by the Deputy President of the Senate, Ovie Omo-Agege.
Top Stories