The Governor of Kogi state has broken his silence following Dino Melaye's removal as senator. 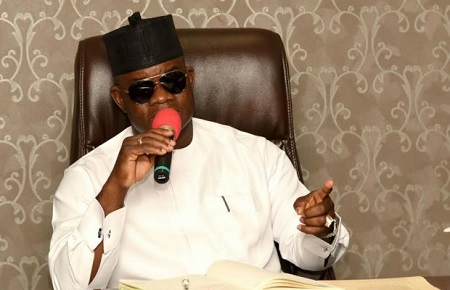 Yahaya Bello
Kogi State Governor, Yahaya Bello has hailed the judgement of the Court Of Appeal which upheld the earlier judgement of the Kogi State National Assembly Election Tribunal nullifying the Kogi West Senatorial election, stating that it further vindicates his earlier position that the opposition Peoples Democratic Party manipulated the elections.
He praised the judiciary for again distinguished itself as unbiased, independent and impartial institution.
Governor Bello gave the commendation in a statement entitled ”Kogi West Appeal Court Verdict: Attestation that Judiciary is Impartial” released his media office, even as he felicitated with Adeyemi on his victory at the courts.
In the statement made available to newsmen in Lokoja on Friday by his Chief Press Secretary, Onogwu Muhammed, Bello said the judgment of the Tribunal which nullified the Kogi West Senatorial Election on the 23rd of September and the Court of Appeal’s verdict delivered some hours ago upholding the said tribunal judgement clearly attests that the judiciary was solidly on course and working in line with the aspiration of people.
The Governor said in spite of the intimidation, unnecessary accusations and rumour-mongering, the tribunal and the Court Of Appeal have lived up to their expectations by dispensing justice without fear or favour.
”For upholding the petition by Senator Smart Adeyemi of the All Progressives Congress (APC) and ordering that a fresh election be conducted by the Independent National Electoral Commission (INEC) in the constituency, the tribunal, led by Justice A.O. Chijioke and the Appeal Court have jointly proved to the world that the people’s mandate was stolen in the last Kogi West Senatorial Election” Bello said.
“The courts did not decide in a vacuum but acted on the basis of the merits and demerits of the case before them.
“The Appeal Court and the entire Judiciary, therefore, deserves our commendation for further strengthening the democratic and electioneering processes in Nigeria”.
He, therefore, congratulated the people of Kogi West Senatorial District, noting that the Appeal Court judgement was a reclamation of their stolen mandate. He said he was confident the people will turn out en mass to elect Senator Smart Adeyemi of the APC in the re-run election which date shall be announced by the Independent National Electoral Commission, INEC in due course.
Top Stories