A Nigerian pastor has told the story of how he and his church members were attacked during service. 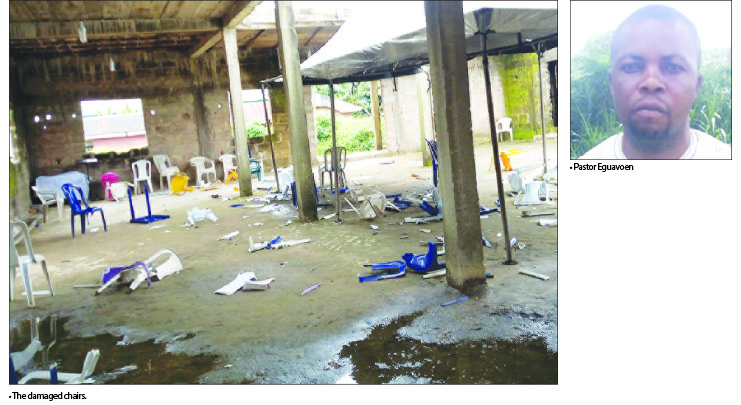 Damaged chairs from the church

The General Overseer of City of God Rest Ministry, Pastor Destiny Osarobor Eguavoen, has narrated how he and members of his church were given the beating of their lives during a church service by youths of Urora Community in Edo State.

The youths reportedly stormed the church to enforce an order by the community’s chief priest banning church service after 8am on Sunday.

The chief priest, Chief Ugiagbe Aiwaguore, the Ohen Ugbodeyaen of Urora, was said to have ordered owners of shops in the community and residents to stay indoors for the celebration of the annual Ikpoleki festival, from 8am.

While other pastors yielded to the order of closing up their church service within the said given time, the General Overseer of City of God Rest Ministry, Pastor Destiny Osarobor Eguaveon, chose to remain standing, earning him and his church members the wrath of the community’s youth.

Narrating his ordeal in the hands of the angry youths, Pastor Destiny said the youths came when he was still preaching and forcefully dragged him down.

“What really happened on Sunday, a group of idol worshippers in our community threatened that churches should not open on the 29th of September 2019 and the time is between 6 to 3 ‘0’ clock and after that, they can go on and hold their service.

“So as a minister, I was not happy inside of me. How can idol worshippers say the meeting of God should not hold?

“So, actually it did not go down well with me because I know no man on earth can stop the work of God because Jesus has already said I will build my church and the gate of hell will not  prevail against it.

“As we were in our service around 9.05 am, we saw that a man came in, he was talking from the outside the church. I told my members to concentrate. Before I knew it, I saw a group of people rushed down inside the church, they drove all the members, started fighting with us, came and meet me at the altar, breaking the property of the church, using the chair to hit my head and draged  me down from the pulpit.

“So, I told my members that they should not fight with them and that God will take control of it.

“So they were saying that I must leave the church premises. They continued to hit me with those chairs, all our musical equipment, all the chairs, you people were at the church and you saw what happened.

Days after the incident, broken chairs and other properties still littered the church located at No17, Edebiri Street, off Benin Auchi Road, Benin City, when our reporter visited.

Explaining why the damaged property were not evacuated,  Pastor Eguavoen said the church decided to leave them because members were still praying over them.

“I decide not to arrange the chairs because we are praying over them and not that if probably we want to clear the whole place we cannot, we can but I just told them to leave them because we want to use them for prayer”, he said.

He said before the ugly incident, God already revealed it to them and that they prayed to Him to give them the grace to remain victorious in the face of the trial and tribulation.

“My message for my members is for them to continue to trust God. We trust God that He is in control because before the incident, God has already revealed it to us that there is a trial coming our way but we just prayed that God should give us the grace to endure it and to the glory of God, no life was lost all my members were preserved by the hand of God”, the clergyman added.

“Myself was beaten up, my clothes were torn apart, my assistant pastor and one other pastor, they were trying to resist them not to come to the altar. So, those my members sustained injuries.

“According to the bible, I saw what happened to all the apostles in the bible. Jesus said anyone that tries to save his life will loss it and anyone who losses his life for His sake will gain it back.

“So, I just trust God that other apostles, most of them apart from John the beloved, everyone dies for the sake of the gospel.

“So, we according to the doctrine we received from our elders, we are ready to die any time for this gospel”, he said.

The clergyman said the matter has been reported to the Christian Association of Nigeria and as a man who is under authority, he will have to rely on their decisions.

“Really, I do not have plans because I am a man under authority. I related it to the relevant authority, the Christian Association of Nigeria (CAN) because our church is under them.

“We do not really have the power to fight the community. So, when we related it, they said okay, they will take it up from there.

“All I did was to give them the information of what really transpired in my church and that was what I did”, he said.

Eguavoen said despite what happened on that fateful Sunday, he will not be deterred as the church will still continue its service in the community.

“We are continuing our service there. We did our service yesterday even prayer is still going on, we are still trusting God that we have a programme this evening and tomorrow and on Sunday. No gate of hell can stop the house of God”, he said.

Condemning the attack on the pastor and his members, Pastor Felix Osi, called on the government to intervene and put an end to such harassment and intimidation of one religion by the other.

“What really happened that day was not really good. When I was in church, I heard it and when I got here I found out that the church has been destroyed by the people who were celebrating their tradition.

“The pastor was injured in the head. I think about four members were still injured. Property, chairs, the generator, everything was scattered.

“People were not really happy. We are calling on the government to put a stop to this because it is not really good. They cannot use their own to spoil other persons own.

“It is not still good for them to come into the church and beat up the pastor and scatter all the things in the church”, Osi said.

A cab driver in the community who preferred anonymity, told Daily Sun that while he is not in support of the beating up of a man of God and his members and the destruction of church property, the said pastor should have obeyed the order given by the priest.

When Daily Sun visited the priest’s house to get his own side of the story, one of his subjects who strolled out of the passage, said the priest was very busy and cannot attend to visitors.