The families of the boys killed by Four policemen have accused the state Director of Public Prosecutions, Dr Babajide Martins, of being an accomplice in the murder of their sons by releasing the Policemen. 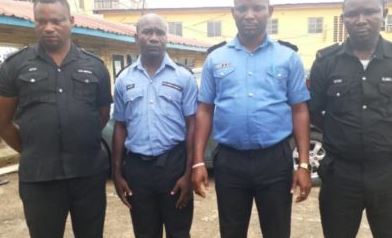 Picture of the Four Policemen

The families of Ayodele Solaja and Ogheneovo Ebobo, who were killed by four policemen in Lagos, have accused the state Director of Public Prosecutions, Dr Babajide Martins, of being an accomplice in the murder of their sons.

The DPP, in a legal advice dated September 16, 2019, with reference number CB:3514/LSXD4/Vol.6/31, said the victims were hit by police bullets and were taken to the Iba Police Station, where they died of gunshot injuries.

In the advice signed by Martins on behalf of the Attorney-General and Commissioner for Justice, Mr Adeniji Kazeem, the DPP noted that the policemen had no case to answer as they acted in self-defence.

The advice read in part, “After carefully considering the facts in the duplicate case file, this office is of the opinion that there are insufficient facts to establish a prima facie case of murder or involuntary manslaughter, contrary to sections 222, 223 or 224 (b) and punishable under Section 229 of the Criminal Law, Cap. C17, Vol. 3, Laws of Lagos State, 2015, against pages B1 (Inspector Fabiyi Omomoyowa), B2 (Sergeant Olaniyi Solomon), B3 (Sergeant Solomon Sunday) and B4 (Corporal Aliyu Mukaila); so, they have no case to answer.

“Facts contained in the case file reveal that page A4 (Anagwu Valentine) was robbed of a Max iPhone and the sum of N200,000 by four armed men on August 16, 2019, on Ipaye Street, Iba town, Lagos. Valentine and Ifeanyi Michael reported the robbery to the police at  the Iba Police Station, which led to surveillance by the police patrol team comprising Omomoyowa, Solomon, Sunday and Mukaila.

“Valentine and Michael pretended to sell another phone to the gang of armed robbers on August 19 on Ipaye Street, Iba, Lagos; the policemen shot the two suspects and took them to the station, where they eventually died and taken to the morgue.

“In the light of the foregoing, this office is of the considered opinion that Omomoyowa, Solomon, Sunday and Mukaila have no case to answer.”

However, the counsel for the two families, Mr Adesina Ogunlana, wrote a petition against the DPP and the state Ministry of Justice over the the legal advice.

Ogunlana recalled that his letter dated August 29 to the DPP in which he highlighted his clients’ call for justice and their deep misgivings about the possibility of a cover-up of the murder of their children, saying that curiously, the DPP had failed to respond to the letter.

He said, “Even more curious is the legal advice issued by the Directorate of Public Prosecutions in this clear and sensitive matter of the extra-judicial killing of Segun Solaja and Ogheneovo Ebobo exonerating their killers.

“With due respect, we consider the exculpation of the killers in police uniform by the DPP as not only hasty and untidy, but a sordid arrangement that insults the intelligence of all right-thinking people and does no honour to the office of the DPP itself, talk less yours.

“The truly disturbing legal advice on the issue is, in our humble view, a complete disregard for the onerous responsibilities of the office of the Attorney-General and Commissioner for Justice, under which the Directorate of Public Prosecutions operates, to see to the due protection and promotion of the rights of all souls in the jurisdiction of Lagos State.”

Ogunlana said it was surprising that the DPP chose to ignore the footage of the daylight execution of the victims by the policemen.

He stated, “Can the office of the DPP claim ignorance of the widely disseminated reports of the dismissal of the four defendants from the Nigeria Police after an orderly room trial for their misconduct of executing Segun Solaja and Ogheneovo Ebobo extra-judicially after the defendants were found complicit of the crime of murder and consequently charged to court?

“Where the office of the DPP is aware of the facts above, why does it fail to interrogate the facts therein, juxtapose same with the ‘facts’ contained in the case file on this matter sent to her by the same police to avoid any chance of obtrusiveness?”

Segun’s father, Chief Mayowa Solaja, said the dismissed policemen were roaming the area and boasting that the victims’ families could do nothing to them, because they were poor.