Zlatan Ibile recorded a diss track which was purposely made to mock her of her rumoured 'body odour'. 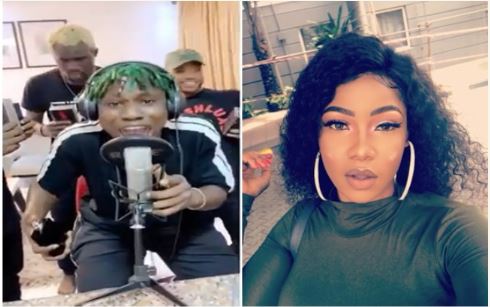 One of the most-watched lady in Big Brother Naija 2019 Reality Show, Tacha has finally replied to the diss song made by Nigerian hip-hop rapper, Zlatan Ibile towards her.

Flash back to the genesis of the story: Tacha who was stated by some of the reality show's fans including Zlatan and Tundeednut [Instagram famous blogger] to be rude and aggressive was evicted from the house after engaging in a physical fight with Mercy.

Meanwhile, according to the BBN show's procedure, any evicted housemate would be asked to take a shower and cleaned up before leaving the house. But amusingly, Tacha wasn't allowed to do so. This provided a chance for those who are against her which Zlatan happens to be among to make a wide jest her.

Few moment after Tacha was evicted, Zlatan Ibile recorded a diss track which purposely made to mock her of her rumoured 'body odour'. He shared it on his IG and the entire Social media was occupied with the story.

Recently, Tacha was asked in an interview on CoolFM with Dotun of her opinion towards this act which many people has condemned Zlatan for being childish and causing strong animosity.

But surprisingly, Tacha claimed not to see anything bad about it. She added that she is also big fan of Zlatan's songs. So therefore she thinks it a normal thing.

Thus she said: "I didn't see it as anything, I like Zlatan and I love his music, it's all love"....
Top Stories