A female student of the Abia State University has attracted attention following a romantic display by her boyfriend. 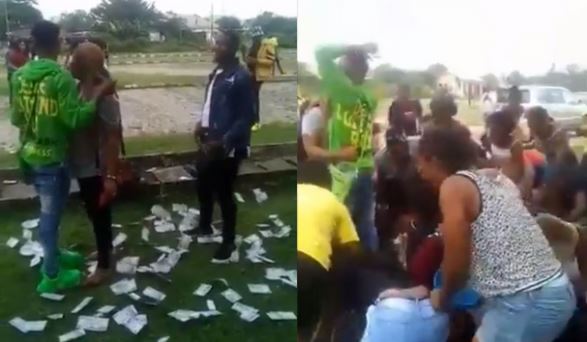 A man decided to spray his girlfriend money in the open on campus, to celebrate her birthday and students began clamoring to pick the money.

In Abia state university (ABSU) students could be seen rushing to pick money from the floor after a man and his friends sprayed money on campus one a girl for her birthday.

While spraying the money, it fell to the floor and neither the girl nor the guy’s friends made any attempt to pick the money. Students who was watching as the couple caused a stir suddenly started running over each other to pick the money littered on the campus ground.

The video has quickly gone viral since it hit the internet.

ABSU students seen picking money at the venue where a guy and his friends, were spraying his girlfriend money, on her birthday.pic.twitter.com/Sk0pUCG8A4

Recall that a few days ago, a video also went viral after a guy was seen spraying his girlfriend money in front of her examination hall after she finished her last papers.

The girl who was embarassed had her wig off and tried hiding while her boyfriend followed her, standing in her way as he continued to spray her the wands of cash he had. Her colleagues just stood back and watched while some advised her to pick her money.