Drama As Goodluck Jonathan's Kinsmen, Others Dump PDP For APC In Bayelsa


Former Nigerian president, Goodluck Jonathan's kinsmen and some others have dumped the PDP for APC. 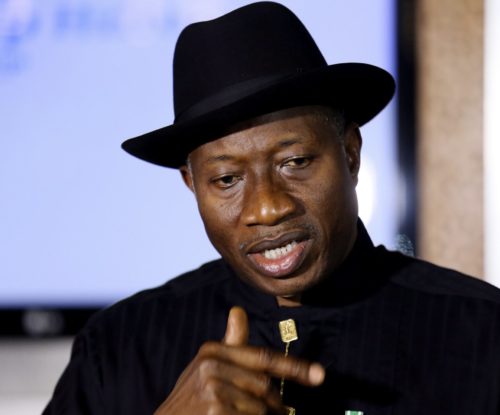 According to a report by The Nation, grassroots politicians and kinsmen of former President Goodluck Jonathan, Chief Robert Enogha and Chief Claudius Enegesi have dumped the Peoples Democratic Party (PDP) for the All Progressives Congress (APC) ahead of the November 16 governorship election in Bayelsa State.

Prior to his defection, Enogha was the Chairman, Bayelsa Environmental Sanitation Authority and former two-time member of the Bayelsa House of Assembly.

Enogha, who was until his defection one of the restoration leaders in Ogbia, was also a former Commissioner for Environment.

Enegesi, one of the political associates of Jonathan, was a Speaker in the old Rivers State when Ada George was the governor.

The party stalwart, who was the pioneer Chairman of the PDP in Bayelsa when the party was formed in 1998, was a former national executive member of the party and a former caucus chairman of PDP, Ogbia chapter.

Also In Nembe, Chief Bright Erewari-Igbeta, a former House of Assembly member and presently Special Adviser to the Governor on Environment resigned his appointment from the government and also from the party.

In the same council, Chief James Jephthah, aka Octopus after series of meeting with leaders and supporters of PDP under the Octopus Umbrella said he and his political associates had decided to withdraw their membership of the PDP.

But Enigha, while joining the APC, cited dictatorial tendencies in PDP as a reason for his decision to leave the party.

He said: “I write to formally inform you of my withdrawal of membership from the Peoples Democratic Party(PDP). I am doing this with so much pain as a founding member of the party which was truly democratic as at then.

“I must acknowledge the immense benefit and experience I have gathered over the years through service as a loyal and faithful member. However I have lost confidence in the party’s ability to accept where the opinion of majority counts, hence my resignation”.

Also in Brass, Chief Beimo Spiff the coordinator of the PDP governorship campaign council in Brass Local Government Area and brother to Senator Inatimi Rufus Spiff, Chairman of the PDP reconciliation committee, dumped the party for the APC.

Spiff and his supporters were received by the Secretary of the party, Alabo Martins.

Beimo- Spiff in his letter of resignation addressed to the Chairman of the party said he was resigning from the party due to some “despicable injustices in the party”.