The long arm of law has finally caught up with some notorious fraudsters who are in the habit of sowing seeds with their loot. 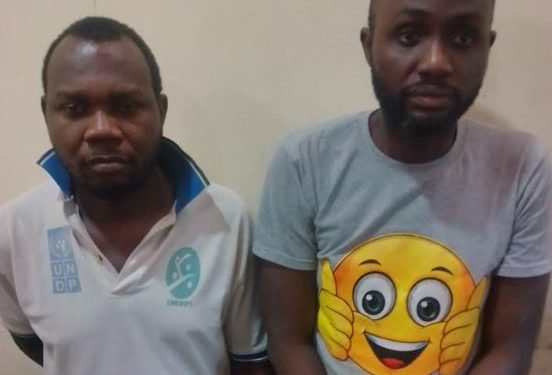 Fraudsters
The two members of a three-man fraud syndicate who specialized in forging LPO to collect goods from companies and individuals and later used some goods or one percent of the proceeds to sow seeds in some of the churches in Nigeria have been arrested by the operatives of the inspector general of police intelligence response team (IRT), TheNation has revealed.
It was gathered that the three man fraud gang conspired among themselves to defraud a company with fake N13 million LPO and used one percent of the proceeds to sow seeds in one of the new generation churches in Nigeria.
Narrating how the gang carried out their fraudulent activities Oluwatoyin said, ”We first sent Taiwo to the Apostolic church to tell the pastor in charge that Joseph George wanted to sow seeds. We later went to rice company in Benue and submitted the LPO for 200 bags of rice at #13,500 per bag .
We also called the Flier Thermacool company in Ilupeju to come to Deeper life church to collect the LPO pretending that we were representing the church whereas the church was not aware of the deal.
Thermacool company later supplied 50 standing AC at N600,000 each, 20 split AC at #90,000 each and 10 pieces of generators at #230,000 each.
We gave seven standing generators to Amaechi, the standby buyer and he gave us #600,000 for transport, 13 split AC but he did not give us a dime. Police recovered some of the goods.
Confessing the second suspect Taiwo said, “I am married with four children. I work in Oil and gas company. I am from Ile Ife, Osun state. I was formerly working in Bako Superstar company that produces sack at #14,000 salary at Oregun Orile in 1998 but I had problem and was fired.
I started hustling in Apapa. When I carry oil, 50, 000 litres or 33,000 litres I get #1 or #50 per litre. The job is quite challenging and frustrating sometimes. My role was to go to Christ Apostolic in Abuja and tell the pastor in charge that I want to sow seed. It was George that printed the LPO but the moment we were done with the transaction he traveled to South Africa. I collected only #250,000. I went to Deeper life church at Ireakari Isolo and told them we wanted to give them AC and we called the Thermacool company. The arrest of Amaechi led to our arrest. We gave church one standing AC.
When the company did not see any money they called the complainant who collected the rice and supplied to the fraudsters
The source disclosed that the fraudsters told the company (victim) that the church was aware whereas the church was not aware.
The fraudsters arrested are Oluwatoyin Shyombo 52 and Adeyemo Taiwo 43 while the third suspect still at large is one Joseph George who masterminded the fraud.
Top Stories