The story has been told of the Lagos community which has been taken over by flood and where canoe has replaced Uber. 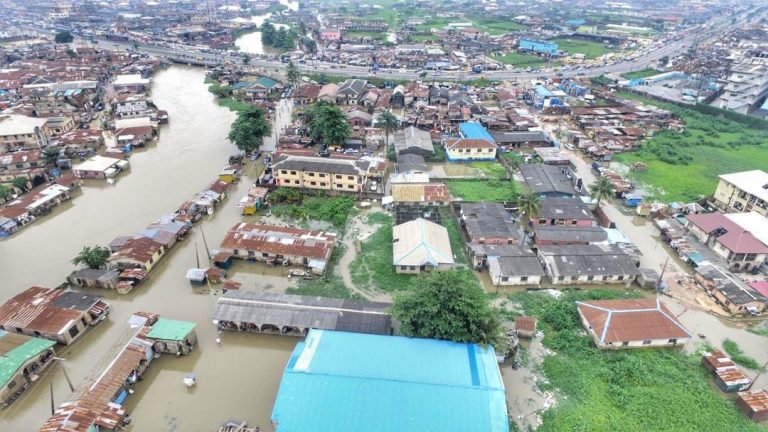 An aerial view of Owode Elede

More than two weeks after a downpour in Lagos, Esther Abu and her children are still counting their losses as they watch their belongings floating in a stagnant pool. In five years that Abu has lived in Owode Elede, along Ikorodu road in Lagos, the recent flooding is the worst.

Apart from finding it hard to get where to lay her head every other night, her means of livelihood is a subject of worry. It’s the same situation for Grace Moses, Abu’s neighbour.

“Years before now, the water stopped at the backyard and did not enter the room,” Abu, idling with her neighbour on a tiny dry space, told TheCable on Wednesday.

“The water has now entered into our rooms. It’s going to a month that we’ve been sleeping inside water.”

The women, who hawk food in the area, said the flood had claimed spaces where they set up to cook and this has pushed them out of business. Tens of shops have also been closed in the area, and the few opened for business are struggling to keep their wares afloat.

A mechanic, who simply identified himself as Energy, told TheCable his workshop had been flooded and about eight cars submerged. For weeks, he has been waiting for the water to dry.

“I have to move my tools up here the express side, to see if I could still get some jobs here. Until this water dries, I can’t go back to check the damages on those cars at the workshop,” he said, pointing in the direction of his sinking workshop.

Moving from Owode through to Ajegunle, TheCable gathered only few houses close to Ikorodu road are spared. 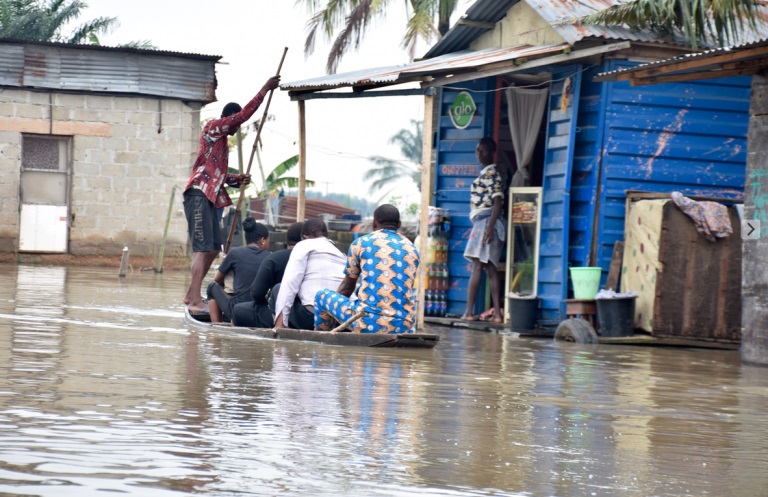 CANOES TO THE RESCUE

Ayenua street, by Owode bus stop, is already becoming a commercial waterway. Less than 300 metres away from the express, are canoes waiting to take residents to their waterlogged houses. Depending on the distance, one of the paddlers who gave his name as Godbless, said the fare ranges from N10 to N200.

“This is our own Uber,” smiling, Godbless would liken his business to the popular ride hailing service.

“We have a number of residents down the street. Most of them go to work outside of this place, and if we are not providing this service, they will be stranded. If you come here at night, people queue for canoes, you know that’s the time when most of them return from work.”

Although Godbless is now cashing in on the situation, he told TheCable that he is not happy because he is also a victim of the flooding.

The rise in the flood this time also came as a shock to Godbless who said it was the first time people would need boat to traverse the area.

“In the past, you could walk through the low level water with your rain boot but only God knows what happened this year. The water lever is too high,” he said.

While academic activities are on in public schools across Lagos, pupils of Anglican Primary School in Ajegunle have been sent home for weeks and wouldn’t resume until the water dries. Officials of the school who spoke with TheCable off the record said they had asked the pupils to go on a two-week holiday but that the time had elapsed yet they are not sure of when to call them back. 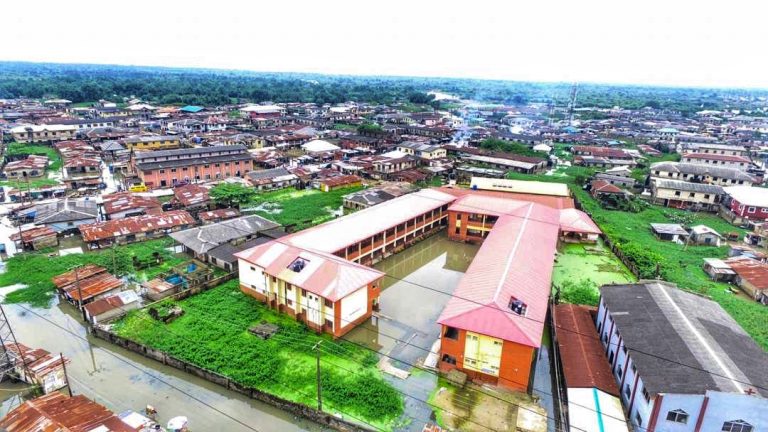 Afolakun Samson, chairman of the School Based management Committee (SBMC), who graduated from the school in 1969 said the last time the school got taken by flood was be in 1964 when the community witnessed successive downpours.

“We need a quick solution because of our children, because this was what happened then in 2010 that they had to move our secondary school out of the area,” he said.

In May, TheCable reported how students were still feeling the effect of relocating the only public secondary school in the community to a distance of four kilometers.

Samson said they have written letters to education authorities, and the State Universal Basic Education Board (SUBEB) had come to inspect the school yet no solution.

Before now, according to Samson, some contractors came and said they were unable to start work because the government was owing them.

IT IS ONLY GOVERNMENT THAT CAN SOLVE THIS

In 2010, Ajegunle and its environs were flooded following the opening of the Oyan dam by the Osun/Ogun River Basin Development Authority (OORBDA). 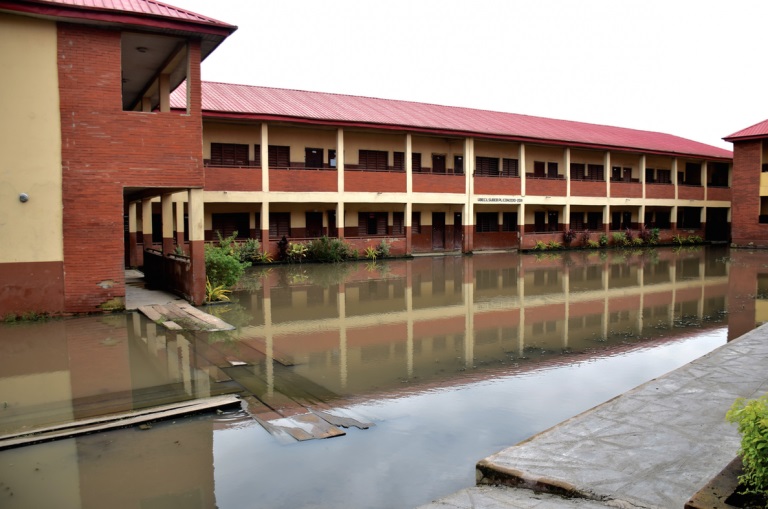 But for the flood, Anglican Primary School would have been an ideal place for learning

Former President Goodluck Jonathan had visited the area, promising the residents that the federal government would intervene, and billions of naira have been reportedly allocated but residents who spoke with TheCable still called on the government to provide help but there has been no response.

“Since the climate change issue, this flooding is coming almost every year. But this year, since I came here I have never experienced this,” Nnadi, chairman of the residents association in Owode Elede told TheCable.

“Even if government wants to partner with the community, we will be able to assist. If they can do a retaining wall, we call it river embankment, the water will no longer penetrate. It will only hit at the retaining wall and go back. It is capital intensive and that’s why community alone cannot do it. If they are not giving us a retaining wall, let them give us a high drainage, then the road will be free from here.”

‘WE HAVE TOLD THEM TO LEAVE THAT AREA’

When contacted, Femi Oke-Osayintolu, general manager of the Lagos State Emergency Management Agency (LASEMA), said the government had a long time told residents to leave because the area was prone to flood.

“If you recall, flood affected that area in 2010 and some of the victims were evacuated to Agbowa,” he said.

“And you will recall then that Lagos state improved on infrastructure of that region in terms of reconstruction of buildings. It was well stated that that place is a flood prone area and our people are aware of that, that people should not build houses there. The government kept them for 10 months at Agbowa relief camp. They even built structures in Agbowa, advising them that they should move from that area and go and settle in Agbowa area that is not flood prone.” 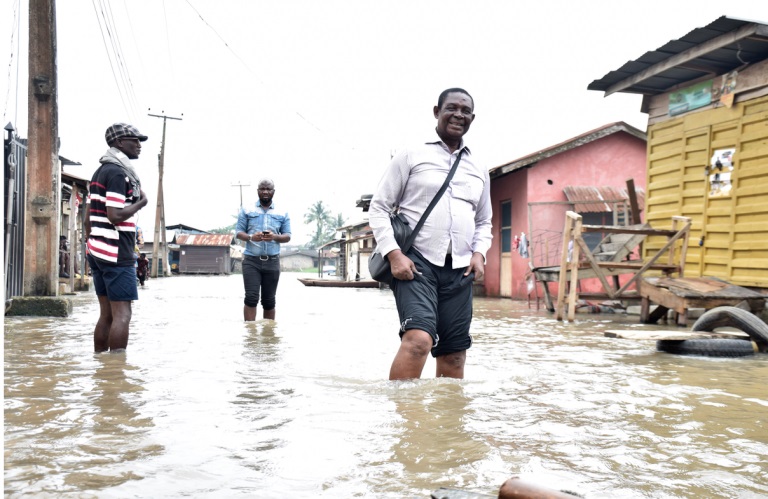 He said there have been predictions of flood in Lagos, and because the government values the lives and properties of its citizens, the government carried out sensitisation in the area.

“We told them to move from that flood prone area. We told them to improve on their drainage system, they should clear their canal. They should ensure they do not build their houses in the flow of water,” he said.

“These are preventive measures. When the government is doing their bits, our people too need to do theirs. You can’t leave it to government alone. Emergency management is the business of everybody. Ask our people, what are they doing? All of them will be saying that it is our ancestral place , we can’t leave the place. All of them will not do the needful and these are the results. They made a choice, they must be able to face the consequences of the choices they made.”

He, however, noted that the local emergency management committee in the area was yet to pass the information to LASEMA.

Last week, Tunji Bello, Lagos commissioner for environment and water resources, had said flood might remain in Owode and other parts of Lagos considered to be lowline areas.