A suspected thief has been nabbed after he was found out to have abandoned his 'thieving' mission to watch a couple have s*x. 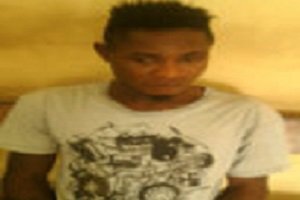 Uchenna Ebube, a suspected thief, has been nabbed after he allegedly abandoned his mission by watching  a couple making love in their apartment, The Nation reports.

The 25-year-old suspect was said to have broken into the couple’s apartment in Mercy Estate, Baruwa area of Ipaja, Lagos State.

The couple, Idris Olumo and his unnamed wife caught the suspect in their living room at about 4 am after they had s*x.

According to the police, Ebube, a native of Abia State, who resides at Alaba area of Ojo Local Government, said he gained entrance into the couple’s apartment through the window in order to steal their valuables.

He however waited for Idris and his wife to finish their sexual intercourse and sleep off so he could carry out his dastard mission.

Luck however ran out on him after Idris rushed to the living room immediately after he finished making love to his wife and caught the suspect.

Ebube was later handed over to the Ipaja Police Division and has since been arraigned before an Ejigbo Magistrate’s Court on two- count charge of burglary and stealing.

Although, he pleaded not guilty, but the police prosecutor, Kenneth Asibor, urged the court to set a date for hearing, promising the Police would disprove the suspect’s claim of not being guilty.

Magistrate, Mr. T.O Shomade, granted the suspect bail in the sum of N100,000 with two sureties in like sum.

The matter was adjourned to November 13.