Every day an innocent Nigerian is being profiled and harassed by the police for the wrong reasons. 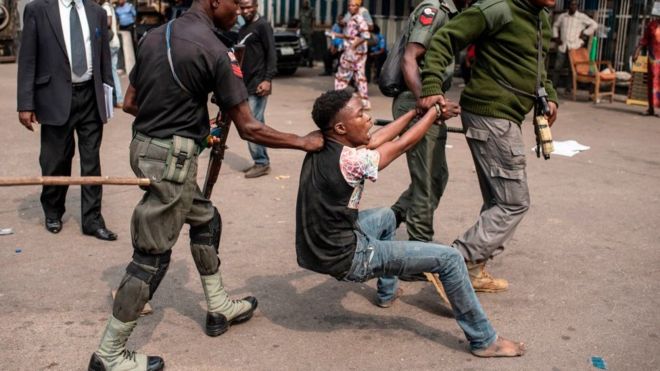 Arbitrary arrest, harassment and extortion of innocent citizens by security agents, on the pretext of hunting down Internet fraudsters, are currently spreading tension and fear among Nigerians, OLADIMEJI RAMON reports

Last year, Nollywood actress, Iyabo Ojo, took to the Internet to complain that her son was harassed by some armed policemen assigned to the Special Anti-Robbery Squad.

The actress claimed that she sent her son and his cousin to get something for her on her birthday. But the young men were stopped and thoroughly beaten by the policemen, who had suspected they were Yahoo boys or Internet fraudsters.

Ojo said the policemen had jumped out of their patrol vehicle and pointing their guns at the young men, demanded and seized their mobile phones.

“When my son’s cousin asked why they were being harassed, they pounced on both of them and brutallised them. I was afraid, so much that I had to be on the phone constantly. Finally the policemen let them go, saying that it was because of me. What if it was someone else? Would they have killed my son and his cousin?” she said.

The actress, who also joined other Nigerians in calling for the scrapping of SARS, wondered if Nigerian leaders ever lived in fear of police brutality like today’s youths.

“These people (policemen) are supposed to protect the youths. It is not every young man whose hair is tinted or who dresses in the hip-hop style that is a Yahoo boy. Even if he is an Internet fraudster, there is a way you can handle him. It is not by shooting him or beating him up,” she said.

Internet fraud, otherwise known locally as Yahoo Yahoo, is a huge problem in Nigeria. In a desperate attempt to overcome poverty, Nigeria’s legion of jobless and disillusioned youths are increasingly taking to Internet fraud. The country’s image in the international community is the worse for it.

Determined to wipe out the scourge of Internet fraud, law enforcement agents across the country appear to be engaged in a rat race with fraudsters. But the police, in particular, seem to prefer an unconventional approach to curtailing the activities of the fraudsters, which is characterised by arbitrary arrests, extortion and physical abuse of innocent youths.

Operatives of SARS seem to have a mental template of what an Internet fraudster should look like. In their opinion, to qualify for harassment and arrest, one only has to be young and drive a good car, be in possession of an expensive mobile phone, carry a laptop computer, wear dreadlocks or have his hair tinted.

While it is true that some Yahoo boys fit this profile, it is not everyone who appears so that is an Internet fraudster. Musicians, actors and other artistes in the entertainment industry, for instance, also dress this way to attract attention.

Unfortunately security agents are unable to make this distinction. Thus, every day an innocent Nigerian is being profiled and harassed by the police for the wrong reasons.

Iyabo Ojo’s son’s case is one out of many tales of unlawful harassment by SARS operatives on the hunt for Yahoo boys.

Just recently, a young and successful veterinary doctor and farmer, Fiyinfolu Awotunde, recounted on his Facebook page  his encounter with some policemen in the Ojodu area of Lagos for driving a Mercedes Benz car.

Commenting on Awotunde’s post, his colleague, Dr Dele Etuk, said this kind of harassment was not limited to those driving Mercedes Benz.

“Pathetic! Even Lexus and Toyota drivers alike get the same treatment from the police,” the young professional said, as he narrated how his father’s presence saved him from harassment.

A few weeks ago, a software developer, Toni Astro,  narrated how, on his way home from work, he was forced into a waiting police patrol van without as much as any explanation by some SARS operatives, who drove him to an ATM and forced him to withdraw half of his savings and hand the money to them in exchange for his freedom.

Astro’s only sin was that he had in his possession a smart-phone, a laptop and some IT gadgets – his tools of trade. He said the thieving policemen had refused to listen to his explanation and pleas.

Last week, operatives of the Economic and Financial Crimes Commission swooped down on a night club located in Osogbo, capital of Osun State and arrested 94 revelers suspected to be Internet fraudsters.

The anti-graft agency would later release 13 of the arrested persons, after establishing that they were innocent.

The President, Committee for the Defence of Human Rights, Mr Malachy Ugwummadu, in an interview with our correspondent, said that while Internet fraud in Nigeria had assumed a dangerous dimension and all hands must be on deck to put an end to it, random and arbitrary arrests and harassment of youths on the street were inexcusable.

Ugwummadu also decried the overzealousness and abuse of power often displayed by law enforcement agents in their quest to check the activities of the notorious Yahoo boys.

He said, “There are enabling statutes empowering the law enforcement agencies to proceed against persons who are living above their means. Therefore, if, in the estimation of a financial crime commission with mandate to crack down on financial crimes, a person is suspected to be living above his means, you will not begrudge them for at least inviting such a person for interrogation.

“The flip side of that will be that such powers are abused in the process of exercising them. Some have taken that as a licence to set up tollgates against persons who are otherwise pursuing their legitimate business.

“They just go on to spread the dragnet and rake in as many Nigerians as possible. They do not just intimidate, but they also extort innocent citizens. Those who are able to cough out between N30,000 and N50,000 come out without further investigation, while those who are unable to do so are made to undergo endless investigation.

“What should be done is for the government to strike a balance between these powers that the law enforcement agencies have.

“I agree that our society cannot carry on in a situation where students own  properties worth millions of naira without doing any work. You have heard of persons, even in the public service, who have unexplained wealth.

"We can’t just fold our arms. But a society in which power is often flagrantly abused must have a way of checking the overzealousness of individual law enforcement agents.”

Similarly, a former Vice-President of the Nigerian Bar Association, Mr Monday Ubani, describes a situation where citizens cannot walk in the streets without fear of arbitrary arrest and harassment as dangerous.

Ubani said that while the Yahoo Yahoo scourge is worrisome, arbitrary arrest and overzealousness by law enforcement agents should never be encouraged in a democratic society.

“If somebody is going to be arrested, it must be on the basis of a solid evidence that he has committed a crime.

"If nobody has reported any crime against somebody and there is no evidence that the person is caught in the act of committing a crime, it is wrong to just pick people up on the road, just because they are dressed one way and profile them as Yahoo boys.

“It is condemnable. To permit that is to return to the era where life was described as nasty and brutish. Government possesses great powers and it must not be allowed to use its uncontrolled power to oppress citizens.

“I think our security agencies need a lot of education. I have seen them arrest a lot of boys and throw them in detention.

The boys would call me, saying they were picked up on the road and the police are demanding that they pay money to regain their freedom.

Who are the criminals now? The policeman that is demanding N50,000 after arresting you for committing no crime, is not a more dangerous criminal than the person he is suspecting to be a criminal.

“We should not encourage the security agencies to turn this country into a place where people don’t have rest of mind. Profiling has no place and basis in criminal jurisprudence.”