Concerned Nigerian Raises Alarm Over Increase Of 'One Chance' Robbers In Abuja, Discloses How They Operate


A concerned Nigerian has raised alarm over the increase of one chance operation in Abuja. 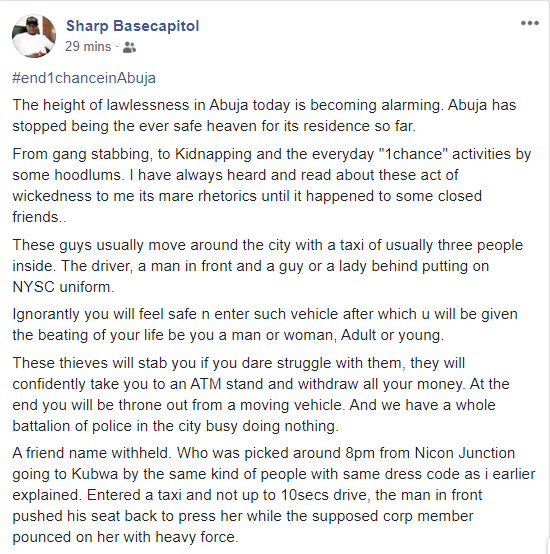 A concerned Nigerian has raised an alarm over the increase of one chance operation in Abuja as he pleads with Nigerian Police to beef up security around the state.

The man identified as Sharp Basecapitol also disclosed on Facebook how the gang members operate, and how some of his friends became victims of one chance including one of them who was stabbed to death.

The height of lawlessness in Abuja today is becoming alarming. Abuja has stopped being the ever safe heaven for its residence so far.

From gang stabbing, to Kidnapping and the everyday "1chance" activities by some hoodlums. I have always heard and read about these act of wickedness to me its mare rhetorics until it happened to some closed friends..

These guys usually move around the city with a taxi of usually three people inside. The driver, a man in front and a guy or a lady behind putting on NYSC uniform.

Ignorantly you will feel safe n enter such vehicle after which u will be given the beating of your life be you a man or woman, Adult or young.

These thieves will stab you if you dare struggle with them, they will confidently take you to an ATM stand and withdraw all your money. At the end, you will be thrown out from a moving vehicle. And we have a whole battalion of police in the city busy doing nothing.

A friend name withheld. Who was picked around 8pm from Nicon Junction going to Kubwa by the same kind of people with same dress code as i earlier explained.

Entered a taxi and not up to 10secs drive, the man in front pushed his seat back to press her while the supposed corp member pounced on her with heavy force.

The man in front stripped her halfway and threatened to insert and iron rod inside her private part out of fear she humbled her self.
And the kept on beating her till she surrendered her ATM cards they took her to an ATM gallery in Gwarinpa and withdrew all the money in her account 56k, they took two of her phones and dropped 2 china phones in her handbag then threw her out from the car.

Another friend of mine his name is Emeka him and his female friend where also a victim and they had no money on them just a normal touch light phone. They were beating and stabbed the lady was inserted with iron inside her private part. And threw them out from a moving vehicle.

Also Precious Robert (Chidimma) runs a wine bar in Kuchingoro Airport road, was stabbed to death after being robbed of her phone and money. She was rushed to Federal Medical center Abuja. That was where she passed away.

The act is happening everyday in Abuja. And i want to believe that these folks are smarter than our security operatives in Abuja..

Please Nigerian Police save the common man who moves around the street everyday in search of greener pastures...