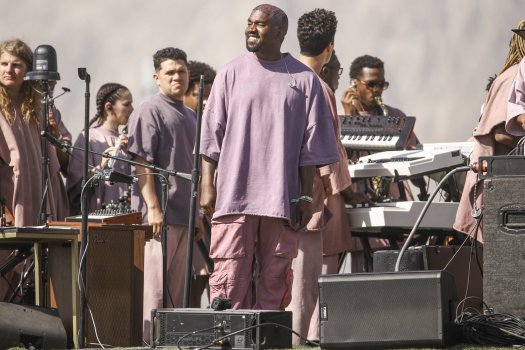 Kanye West may be married to serial sultry picture poster Kim Kardashian , but he thinks all the sexiness on Instagram is a bad thing.

Speaking in an interview with Apple Music, Kanye, who has recently converted to Christianity, compared Instagram to "modern day cigarettes" for how addictive it is.

He believes women wouldn't be taking or posting such saucy photos if apps like that didn't exist.

Kanye said: "I suffer - and I appreciate the suffering because we can just feel a little bit of what Jesus felt when we suffer - but social media makes me suffer.

"I suffer from that and by me saying this out loud, I'm sure there's other married men that suffer in a similar way that are happy to hear me say, 'Oh ya, I'm suffering.'"

When asked why this relates to married men, Kanye said: "Because social media prompts women in particular to put out content that they wouldn't have put out..."

When host Zane Lowe asked him if he was referring to his sex addiction, he responded: "Yeah... I deal with my addiction.

"When I was younger and I wanted to see something like that I had to pay someone that was older to go to 7/11 and buy it."

Kanye recently told wife Kim that it affects his soul when her pictures are too sexy.

Kanye is currently promoting his new album Jesus Is King, which came out on Friday.