A man who was caught after cheating on his girlfriend has taken his own life by hanging. 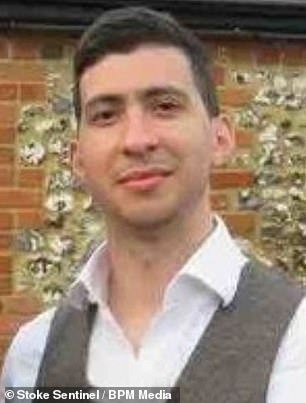 Jonathan Harvey
A 35-year-old father has taken his own life by hanging after being dumped by his girlfriend, according to a report by Dailymail.
The paramedic hanged himself in his bathroom after he was dumped him for having an affair.
Jonathan Harvey killed himself at his home after the his partner found out he was having an affair and broke off their relationship.
He worked for West Midlands Ambulance Service and was found dead in his home in Staffordshire, after he failed to show up for training at work on August 20 this year.
A worried colleague, who went to Mr Harvey's home and kicked in the bathroom door, found the paramedic's lifeless body.
Concerns for the mental health of Mr Harvey had been raised days prior when his ex and the mother of his child had found him inebriated and lying face down in the bath.
Giving evidence, Detective Sergeant Darren Jones, from Staffordshire Police said: 'Police officers attended the scene and the circumstances surrounding the death were fully investigated.
'Prior to his death he sent texts to ex-partner starting on August 16. She stated he sounded very drunk and went by him at 10pm to find him naked lying face down in the bath. She believed it was a cry for help and called an ambulance.
'As soon as they attended his behaviour flipped completely to normal and he refused to go to the hospital.
'Over the weekend she had a number of texts and conversations with Jonathon about his mental health, but he still didn't seek assistance.
'On August 20 he was supposed to attend a course with West Midlands Ambulance Service. He didn't attend and his line manager was concerned so went to his flat.
'He managed to get in but couldn't open the bathroom door, he thought it was secured with something behind it.
'He kicked the door down and found Jonathon with ligature around his neck on the floor. The line manager carried out all the checks but he was clearly dead. There were no signs of trauma to the body, just the marks around the neck.'
The inquest heard Mr Harvey, who had also previously been an on-call firefighter in Staffordshire as well as a Stoke-on-Trent paramedic, had penned a farewell note.
'In terms of reasons we indicate the recent relationship breakdown. He had an affair and it came to light with his ex-partner who he had a child with. She didn't want to be in relationship after the affair.'
The cause of death was given as hanging.
A blood-alcohol test showed a reading of 63 which means he was just under the drink-drive limit of 80. There was also a small amount of codeine in his system.
Coroners officer Andrew Heathcote added: 'A check was ran to see if he was known to local mental health organisations but they had no knowledge of him.
His GP Dr Krasauskeien sent information but there was nothing of significant note, very little except standard vaccinations and no suggestion of psychiatric history at all.'
South Staffordshire Coroner Andrew Haigh concluded Mr Harvey killed himself at his home in Brewood.
He said: 'I've been told that Mr Harvey was only 35 at the time of his death. He had no recorded psychiatric history, although it was clear he had mental health issues prior to his death but wouldn't seek assistance.
'On August 20 he did not attend a training course. His colleagues were concerned and went to his flat. Once they got in there they find Mr Harvey dead with ligature to his neck.
'Toxicology results show a modest amount of alcohol and some codeine, but not significant.
'Police attended and investigated. There was no suggestion of third party involvement and a note that can be described as a suicide note was found as well as him also searching how to commit suicide.
'Bringing that all together, I'm satisfied Mr Harvey intended to kill himself. The cause of death is hanging, and my formal finding is one of suicide while mentally unwell.
'I would still take this opportunity to convey my sympathy to his family for the sad circumstances of his death.'
Top Stories