Is My Wife Right To Insists No S*x Until Wedding Night Even After Our Traditional Wedding?


A man has been left confused after his wife refused him his conjugal rights even though they have done traditional marriage. 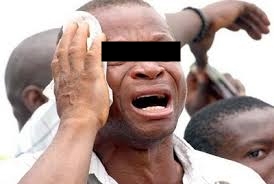 Crying man
A Nigerian man has asked Nigerians to help him make the right decision after several sex denials by his wife.
He revealed that after their traditional marriage, the wife has refused to allow him fulfill his conjugal rights.
He wrote the story below on Nairaland:
"Friends on NL I greet you all. Trust your day is going well? It is with very heavy heart and confused state of mind I sent this post on this platform so you can advise me on what line of action I should take. Pastors and genuine men of God should also advise me on what to do as well.
There is this lady i have been dating for about a year and 6 months now. We love each other to the moon and most importantly we respect each other opinion and decisions. She is a born again christian who appreciates the things of God more than she appreciates me which of course I have no issues with.
When we agreed to start up a relationship after being friends for about 6 months, it was agreed that there will be no sex until the wedding night but at a point I asked her "what if we are done with traditional marriage rites are we still not gonna have sex? To my creates surprise she said we won't until church wedding is done. I did not actually took her serious.
Fast forward, on the 15th of July 2019 the traditional marriage was done in her father' compound in the east and all I was asked to pay and give was paid and given without any remainder . after the traditional marriage we went back to my house in abuja. Note that we were not staying together before now. I am base in abuja while she is in owerri. When we got home that night I told her we can now make love as husband and wife hence the traditional rites has been done and most importantly the bride price paid. To my amazement my wife bluntly refused. She told me she will never compromise her stand on pre marital sex
I have been very faithful to our agreement based on her claim that she is a virgin. But refusing me my right over her body after every thing including the bride price has been paid is something I can never subscribed to and to this end I have I have involved her parent and her pastor her decision however, still remain no sex till the wedding night. I am putting the wedding on hold for now until she willingly allow me make love to her and she seems not to be comfortable with my decision as well.
This is the dilemma I have found myself please I need your wise counsels on this. Thanks and remain bless. Moderators kindly push this post to the front page so it can have adequate views it deserves thanks."
Top Stories