Two armed robbers have been taught a bitter lesson after messing with the wrong guys during a robbery. 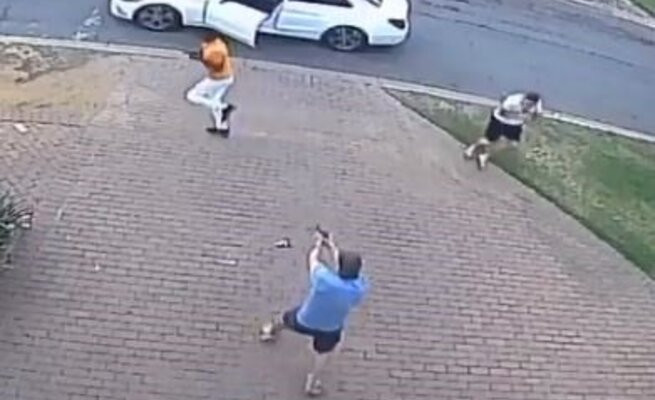 Man shoot two armed robbers
Two armed robbers ran for their lives after a botched robbery attack in La Gratitude Circle in Lonehill Sandton, South Africa.
In a video shared on a Facebook group, Nationwide Crime SA two armed robbers in a white Mercedes Benz pulled up on two white guys they wanted to rob.
The robbery however took a different turn after the man the robbers tried to rob pulled a gun on them and started firing, making them flee the scene almost immediately.
It was revealed that the men in the Benz followed the man when he was on his bike with his dog from Village Church.
“The boom slowed them down. As I got home, I put my bike in my car port, park my truck inside. My son came out, took my dog inside.
“They then came past in the white Mercedes, I thought It was neighbours or visitors to a few houses down from me,” the man told Nationwide Crime SA.
The man said they then made a U-turn and came back parking quite aggressively and the passenger’s door opened.
“The guy with a pistol in his hand got out, when I saw the gun, I knew it was a robbery, I drew mine and started firing. They then sped away. On the way out they crashed through the boom."
Here is the video below: