A journalist was diagnosed with the deadly breast cancer during a live, on-air mammogram. 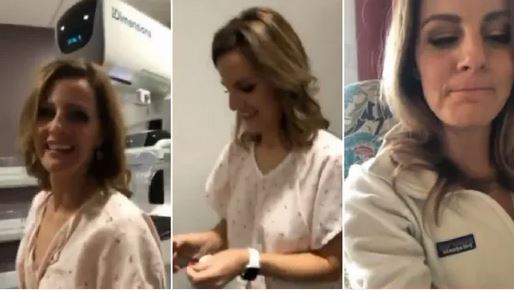 – only to end up being diagnosed with the disease live on-air (Pictures: KFOR)

Ali Meyer, 41, appeared relaxed and happy while sharing preparations for what she thought would be a routine screening at the Stephenson Cancer Center in Oklahoma City last October.

But the KFOR reporter filmed herself sobbing just minutes later, and told viewers: ‘Alright, so I was hoping for a routine little mammogram, and that’s not how this went.

‘I was just sure we’d have nothing today, but here we are…

‘I have breast cancer and I don’t have a tonne of answers yet.

‘But im going to have an MRI next week to confirm exactly what we’re dealing with and get a plan of action in place.’

Ali also explained the impact of the unexpected diagnosis, saying: ‘It’s been hard and shocking.

‘It does kind of rock you to your core.

‘This is not the news I was hoping to tell you about to raise breast cancer awareness, but it’s what I got.’

Ali was diagnosed with non-invasive ductile breast cancer in her right breast.

It is one of the most survivable forms of the disease, but Ali was initially distraught on being told she would have to have her entire right breast removed.

But Ali quickly came round to the idea on chatting with surgeons, and even let cameras film plastic surgeon Dr Oscar Masters perform reconstruction surgery.

He says advances in surgical techniques mean many women now get to keep much of the breast skin, and their nipple, making reconstruction look far more natural.

She is now free of cancer, with doctors telling her she is ‘most likely to be completely cured’ as a result of her decisive action.

Ali returned for another breast cancer awareness month mammogram this year, and is now set on sharing her story to try and help other women beat the disease.

She explained: ‘My outcome was better because my mammogram found the cancer before I even knew it was there.’