The soldiers were being arraigned for various offences including disobedience, desertion and misconduct but assured justice will be served. 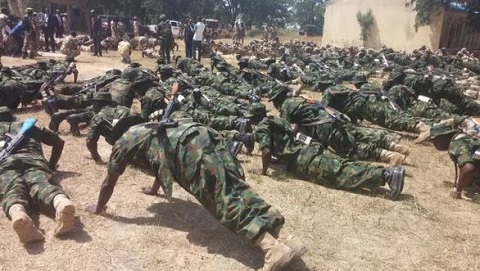 The Nigerian Army has arraigned over 80 soldiers at a General Army Court Martial in Maiduguri over various offences.

“Acts of cowardice, desertion, unsoldierly behaviour and other forms of undiscipline has no place n any army, more so am army executing war, “ the GOC said.

President of the Court, Brig Gen Wisdom Etuk has already commenced trial processes with the presence of lawyers to the accused.

He said the soldiers were being arraigned for various offences including disobedience, desertion and misconduct but assured justice will be served.

He said section 131 sub-section 2 (d) of the Armed Forces Act CAP A20 LFN 2004 empowered him as the General Officer Commanding to constitute the court martial to determine the culpability or otherwise of the offenders.

He explained that the constitution of the court martial was not different from other military assignment carried out by him as the GOC. He said the court did not have any special interest to serve “other than the routine duties carried out within legal confines of regimentation.”

He assured that the 7 Division would ensure a level playing ground for all parties appearing before the Court. “The resolve of the division and indeed the Nigerian Army towards ensuring just and fair adjudication of all the cases will not be compromised,” he promised.

Commenting on why most of the offenders were young soldiers, the GOC maintained the army would not condone any act of indiscipline irrespective of the year of entrance into the force. “They all voluntarily joined the army and signed to work,” he said.