The wife of a police officer who was killed in the Balogun market fire has opened up about what his death means to the family. 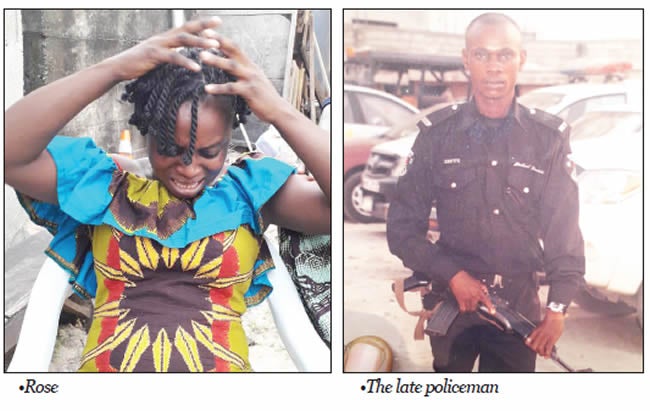 Rose Dominic, the wife of the late policeman who died in the Balogun Market fire, says she is at a crossroads following the death of the family’s breadwinner, a report by Punch Metro has shown.

The mother of four was awaiting the arrival of her husband, Sergeant Michael Dominic, from work on Wednesday when she was jolted by a phone call announcing the death of the 44-year-old cop

Michael, attached to the Ebute-Ero Police Station, was on duty at the scene of the fire which gutted Brasas Fabrics in Balogun Market, Lagos Island.

It was learnt that the native of Ekwureku in the Abi Local Government Area of Cross River State was chasing people away from the disaster spot when a concrete which suddenly fell from the fire-ridden building crushed him to death.

It was gathered that Dominic had returned to the station around 8pm on Tuesday from a duty when he was told that the market was on fire.

He reportedly rushed to join a team of policemen deployed in the scene and tragedy struck 30 minutes into his arrival. Goods, largely fabrics, worth millions of naira were trapped in the fire which raged for two days.

Amidst tears, the deceased’s wife, Rose, told City Round that the family and her in-laws lived on Michael’s salary, lamenting that his death spelled doom for the entire family.

She stated, “We have been married for 11 years and we have four children together. The first child is about to start secondary school; the second is in primary three, the third one is in Nursery 2 while the last child is in crèche. What will I tell Samuel who really loves his father? He was the breadwinner of the family and he was the one taking care of his parents being the first child. Everybody depended on him. I don’t know where to start from; I am confused.

“He left for work on Tuesday morning and was supposed to come back on Wednesday evening. It was this afternoon (Wednesday afternoon) that someone called me and told me he was dead.”

Recalling their last words, Rose said her husband while leaving for work on Tuesday morning appealed to her to endure the trying time the family was going through and promised her a surprise next year if he was promoted.

“I want the government to help me with my children’s education. I don’t have any means; I depended on my husband alone. I don’t know how their future will look like without their father. I don’t know what to do. I don’t know if I can survive without my husband; even the children’s school fees, we have not paid it,” she remarked tearfully.”

“He had a plot of land that he wanted to develop. He told me he would soon start building it. My husband was a good man. He was a man of God and he lived a true Christian life. He promised to get a shop for me,” she added before emotions betrayed her again.

The deceased’s uncle, Sunday Ideba, said he was in his shop in Lekki when someone broke the death of his nephew to him on the phone. “I was confused. I just rushed down,” he said.

Recounting the career of the late officer and their last moment, Ideba said it was unfortunate that Michael did not live to bury his aged parents.

He stated, “He joined the police in 2003/2004 and served at the Maroko Police Station for years. He was posted to the North sometime ago in the heat of the Boko Haram attacks. He would call and ask me to pray for him. He spent about three years there before he was posted to Port Harcourt (Rivers State). It was from there he was redeployed in Lagos two months ago.

“The person we expected would die is his grandfather, who is over 90 years old and could not walk again. He was the first son of the family and they depended on him. His mother is also old.

“Last Thursday, we still discussed about the health of his father. He told me that it was only me and a relation, Austin, he relied on to support him in burying his father. I told him to pray that whenever the father died, we should have means to give him a befitting burial. Who will bury the father now? His death is still like a dream to me.”

The uncle appealed to the police authorities and the Lagos State Goivernor, Mr Babajide Sanwo-Olu, to assist in the upkeep of the wife and the four children.

“This man died in the line of duty. He died while trying to save people from the danger zone. The children are in school; there is no one to sponsor them again,” he added before bursting into tears.

Meanwhile, traders whose goods were destroyed in the razed complex, are still counting their losses.

Some of them approached by our correspondent declined comment, saying they had yet to recover from the shock of the loss.

One of them, Abdulraheem Raji, whose boutique got burnt in the inferno, said he was too devastated to talk. He looked on as remnant of the fire smouldered from the rubble.

His brother, Abdulrahman, who lamented that goods worth about N10m were lost in the fire, blamed the incident on lack of safety measures at the market.

He said, “We were only able to remove few of his goods. We had to run away for our lives. The owner of the building was using all the floors except the ground floor which she rented out. About 20 shops and a church were on the ground floor. This was not the first time the complex would be on fire. It happened in 2017.

“The government should be checking buildings like this in the market regularly to see if first aid safety equipment is put in place. They should check if they have a fire extinguisher and if it’s not expired. There was a fire extinguisher in the building but was it functioning? If there was a good fire extinguisher, it would have helped in putting out the fire before it escalated.”

The security man in charge of the five-storey building, Idris Ibrahim, said he got a call two hours after he got home that day from his duty post.

“I didn’t know when the fire started. I left the market around 8am. I was surprised when they called me that the complex was on fire. By the time I got here, the fire was much. It was unfortunate. I don’t know how to cope for now. The little amount I collect every month is what I use to cater for myself and family,” he bemoaned.

The Special Adviser to the Governor on Central Business District, Mr Olanrewaju Elegushi, said it was rather pathetic that Dominic paid the supreme price.

“The building collapsed after long hours of burning and part of the debris hit the policeman, Sergeant Michael Dominic, who was trying to send people away from the scene. He died in the process.

“The cause of the fire is not yet confirmed; we are just getting different stories from different quarters. Some people said it was a generator explosion; some said it was as a result of exposed wire. We will get in touch with the owner of the property. I believe the owner would be able to tell us what caused the fire.”

The Area A Commander, who oversees the police stations on Lagos Island, ACP Bode Ojajuni, said 12 hoodlums who took advantage of the incident to steal, had been arrested.