The Nigerian Army stationed in Abia have arrested some criminal elements, while also rescuing a pregnant woman from human traffickers. 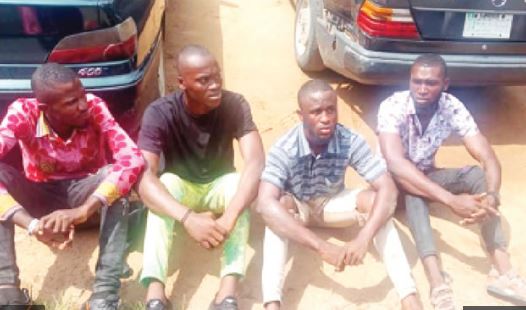 The suspected human traffickers and cultists

Soldiers attached to the 14 Brigade, Nigerian Army in Ohafia, Abia State, have arrested a suspected human trafficker and rescued a pregnant victim identified as Chinonyerem Nkemakolam.

A statement by the Deputy Director, Army Public Relations in the Command, Captain Dudua, revealed that the suspect was arrested by soldiers during the Exercise Atilogwu Udo 1 in the state.

Dudua said the soldiers also arrested some suspected cultists during a raid, adding that the suspects were arrested following a tip-off by local communication channels.

He stated, “The Exercise Atilogwu Udo 1, which commenced less than a week ago, has begun to record huge success in Abia State under the watch of Commander, 14 Brigade, Ohafia, as soldiers discovered and arrested a suspected human trafficker and rescued a pregnant victim, one Miss Chinonyerem Nkemakolam.

“The feat, which also includes the arrest of some cultists, was made possible following the provision of local communication channels, an initiative that has convincingly brought tremendous redefinition of the security framework in the state.”

He added that some residents, who expressed excitement over the feat, thanked the Nigerian Army for being proactive.

“The residents called on Abia people to cooperate with soldiers involved in the Exercise Atilogwu Udo 1 by providing them with adequate information that will assist in fishing out hoodlums operating in the state,” he said.

Dudua pointed out that the partnership between the army and civilians was an initiative that had strengthened the desire to address the security challenges in the state.