Also, at the Seme border in Lagos on Monday, there were fuel queues as only two filling stations were selling fuel. 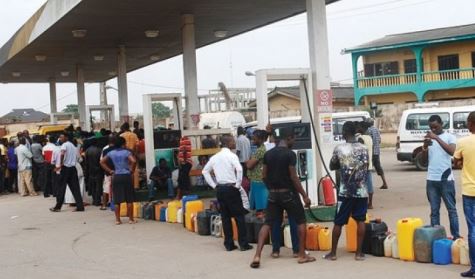 Residents of border communities in Ogun, Lagos, Adamawa, Katsina and Sokoto states are groaning following the Federal Government’s suspension of fuel supply to areas within 20 kilometres to the nation’s borders.

On Thursday, the Comptroller General of the Nigeria Customs Service, Hameed Ali, had directed that no petroleum products should be supplied to any filling station within 20 kilometres to the borders.

Investigations by  correspondents in Ogun, Lagos, Adamawa, Katsina, and Sokoto states showed that the government’s order had triggered fuel scarcity and hike in the prices of petroleum products.

For instance, investigations by one of a correspondents showed the Federal Government’s order had led to fuel scarcity in communities such as Ihunbo, Ilase, Ajegunle, Idiroko and Agosasa in the Ipokia Local Government Area of Ogun State.

Also, at the Seme border in Lagos on Monday, there were fuel queues as only two filling stations were selling fuel.

Many filling stations shut in Ogun


The PUNCH learnt that so many filling stations within 20 kilometres to the border in Ipokia, close to Benin Republic had been shut by the Federal Government’s task force on border closure.

One of the residents of Ipokia, Elijah Akinola, in an interview with The PUNCH, accused the security agencies in the area of sabotaging the economy of the country.

He asked, “Can you imagine buying a litre of fuel at the rate of N600? Before we can get fuel for N145 in Ipokia, we will need to go to Owode, which is 28 kilometres away. We don’t know what we can do to survive.

One person dies in Ogun

Akinola said in Ipokia that one person died following the inability of a hospital to get fuel to power a generator to perform a surgery on the deceased.

“As I am talking to you, to power generators in hospitals at Idiroko is difficult. Ihunbo, Ilase, Ajegunle, Idiroko, Agosasa and other towns in the Ipokia Local Government Area of Ogun State are affected. There was a patient that died this afternoon (Monday) just because there was no electricity to power machines for medical examinations.”

Another resident, Ajibade Idowu, said the task force, which comprised soldiers, immigration officers and other security operatives, commenced the implementation of the policy in the area on Sunday. But he accused some members of the task force of highhandedness.

“Everywhere was deserted as if the Federal Government had declared a curfew. Fuel is even not available at the black market. People are lamenting and complaining of the situation.”

On the alleged harassment of the people by the security agencies, Akinola said, “The security agents are harassing people. We cannot go out of this local government. If we are coming from Owode with five litres of fuel, they will harass us.

The PUNCH gathered on Monday that only two out of more than seven filling stations at the border between Nigeria and Benin Republic in the Seme area of Lagos were selling fuel.

One of Punch correspondents also gathered that more than 1,000 trucks belonging to Nigerians that could not cross the borders were still stranded.

However, investigations in Katsina State showed that filling station owners in the border towns of Jibiya and Kongolam continued to sell fuel on Monday despite government’s order.

It was learnt the stations selling fuel were mainly independent marketers. It was however observed that they were selling to only motorists and motorcyclists.

A station attendant at a fuel station in Jibiya said he had not received any instruction directing him to stop selling fuel ,even as of Monday.

Sale of petrol puts on hold in Bakassi

After the suspension, sale of fuel was put on hold in Bakassi, Cross River State.

A source at the border town, where internally displaced persons are sheltered, said, “The four filling stations in the town were not allowed to dispense petrol to motorists after the ban. But after about four days, the security people considered that since most of the people of Ikang used Okada, they allowed them to enter the petrol stations to buy into their motorcycles.

“They also allowed drivers of commercial vehicles plying Calabar to buy the product. But they don’t allow people in jerricans.”

He said he could not ascertain if the price per litre was increased.


Only smugglers are still supplying fuel to border areas – NUPENG

Meanwhile, the Nigeria Union of Petroleum and Natural Gas workers has said it will establish a task force and redesign its stickers so as to effectively enforce the recent order by the Federal Government banning the supply of petrol to border communities.

NUPENG on Monday said those who were still supplying petrol to border towns despite the Federal Government order were smugglers and not members of the union.

The General Secretary, NUPENG, Olawale Afolabi, told one of our correspondents that the union was aware of the Federal Government order stopping the supply of petrol to filling stations located 20 kilometres to border towns.

He said, “We are aware of the directive but smugglers are the ones taking products to these communities. It takes a lot of effort to stop criminals. In fact, we have also set up a task force to ensure compliance.

“Most times you see the diversion of products that are supposed to go to the hinterlands. These products are taken to the border areas through diversion by armed smugglers.”

When told that some of the trucks used by these alleged petrol smugglers often had NUPENG stickers, Afolabi replied, “They are smugglers and not our members. But when you see their trucks, for them to escape easily, they will put our stickers.

“So right now, we are trying to redesign our stickers and again we are setting up a task force to ensure compliance. The union is handling this. However, I want you to know that these smugglers carry arms and we cannot confront them.

“Therefore, our task force will mainly educate our members at the depots and try to halt the sale of products to illegal marketers who may divert these products. So, only law enforcement agents have the capacity to confront these smugglers.”