The Story Of Goodluck, The Kid Vulcaniser Who Wants To Be Engineer (Photo)


He may not have all the good things that life offers at the moment, but Goodluck, a kid vulcaniser has the dream of becoming an engineer. 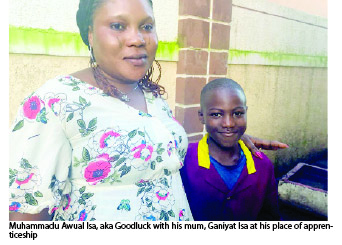 Recently, Stephen Teru, a former National Youth Service Corps (NYSC) member, made waves after volunteering his carpentry skills to furnish a health centre and the classrooms of two schools in the local community where he was posted.

The University of Jos (UNIJOS) graduate of animal biology, who was deployed to the Old Netim community situated in Akamkpa LGA of Cross Rivers, moved to produce desks, tables, benches, and shelves for over 80 students in the two public schools — amid a dearth of resources required for the project.

He said he learnt the trade in the carpenter’s shop opposite his mum’s spot where she was selling akara and other fries.

Goodluck, a primary five pupil of Apo Model Primary School, currently spends his after school hours, weekends, holidays learning car servicing at AYA Shafa filling station owned by Emmanuel Adewale, who has been in the business for over 25 years. Goodluck, whose best subject is mathematics, when cornered by Daily Sun at his place of apprenticeship said: “I like the work because I want to be a master in it by the time I am done with school.”

At his place of apprenticeship, his name is on everyone’s lips as he is sent to bring one thing or the other. He is so knowledgeable on the job that it’s difficult to tell he has only spent three months as at the time Daily Sun met him. He calls the owner of the business dad and not boss, and watches out for his interest to forestall any attempt to cheat him.

Goodluck’s journey into learning alignment and tyre service started when his mother, Ganiyat Isa, an indigene of Ibadan in Oyo State with the permission of her husband who resides in Lagos,  decided it was best for Goodluck to move to Abuja and live with his grandmother and continue his schooling.

When Daily Sun approached Ganiyat Isa, she said: “I am from Ibadan in Oyo State but I live in Lagos with my husband. I am a business woman in Lagos, I sell drinks, slippers, singlets and boxers etc but since I came to Abuja to visit mummy I have been assisting her in the shop. My son, Muhammadu Awual Isa lives with my mother here and goes to school. He comes to learn tyre servicing here after school. That is how I want it because I don’t want him to play around or join bad gang.

“I have five children, four boys and a girl. My first born is 15 years and is schooling at Ilorin while Goodluck will be 13 soon. Before I enrolled him here, I asked him what he will like to do after school because I will not like him to roam the streets after school. He was the one that told me he will like to learn this one. So after I informed my husband, (Ahmed Isa) about what I was planning to do, he was in support and ever since he joined close to four months ago, I can tell he is enjoying himself. His dad is an engineer and he has always admired him and wants to be an auto engineer like his dad. His Muslim name is Muhammadu Awual Isa, but they nicknamed him Goodluck at this place.”

When asked why he chose car servicing Goodluck said: “My mum wanted me to come here and learn after school and I will advise other parents to allow their children to do the same. My boss, Oga Wale is a good man and treats us well but if you are not obedient and observant, he will punish you.

“I close from school 2pm and come to the workshop once I change my clothes and I have had my lunch. The work does not disturb my studies because I study at night before I go to bed. My best subject is school is mathematics, last term I came second. I have been here for three months. Now I can change tyres very well. I want to be motor engineer in future. I am in primary 5.”

According to Adewale, the owner of alignment and tyre service center, he sees himself in Goodluck when he was growing up. “Goodluck’s mother approached me that she will like to have him come and be working here after school hours. But during holidays, he starts in the morning. He has been here for three months. For a child, his behaviour is perfect; he is even better than the adults because he listens to instructions and carries them out accordingly. He is quick to learn, easy to correct.

“If he carries on with the way he is going, he will be a professional in no time, say two or three years. But because he is a child, his strength is limited. If he were to be 15 years, he would have been doing between 50 to 60 percent of the work perfectly. But as a child, we have to take it a step at a time.

“The idea of parents allowing their children to learn handwork while in school is not just a good idea but the best idea whether the country’s economy is okay or not. The person I love so much in my life is my dad although he is now late. Everything he told me has come to pass. He was the one that advised me to go and learn any handwork of my choice, if I didn’t listen to him there is no way I will be where I am today. So parents should encourage their kids to learn handwork, it doesn’t have to be tyre servicing. Any area your child expresses interest, let he or she follow that path.

“At the stage Goodluck is, I cannot leave a car to him by himself to handle because the work is done stage by stage. There is a alignment, wheel balancing, vulcanizing, patching, service, oil drain and all of that. At the stage he is now, I can leave a car for him to gauge, because of his strength he cannot change tyre all by himself because some of the nuts are stiff and hard to loosen. Even though he has the knowledge on how to go about doing these things, he doesn’t have the commensurate strength to carry it out. He can also handle patching for now, he can pull out the tyre for patching. My child is also interested in the work I’m doing because he saw Goodluck but where I live is far from my work station. So he learns around the house area, another of my outfit not far from the house.”