Many Feared Killed As Petrol Tanker Falls, Explodes In Ogun


While sympathising with those affected by the ugly incident, Akinbiyi advised motorists to avoid Toll Gate Area for now. 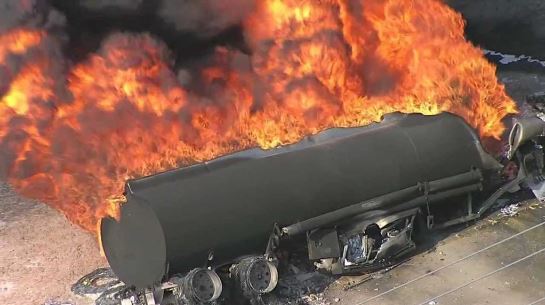 A petrol-laden tanker fell in the wee hours of Friday around Toll gate, Ota axis of Lagos-Abeokuta highway, while approaching Shoprite Store, killing yet to be identified number of people.

Akinbiyi told DAILY POST that there were casualties but the number could not be ascertained as of the time of filing this report.

According to Akinbiyi, the TRACE Corps, Fire Service agents, Federal Road Safety Corps, the police, the NSCDC, Naval officers and the Army were all on ground for rescue operations.

While sympathising with those affected by the ugly incident, Akinbiyi advised motorists to avoid Toll Gate Area for now.

“Nevertheless, they can go through the Old Ota Road to link Awolowo Road down to Sango under bridge to link Lagos-Abeokuta Expressway,” he said.