As many as six people have narrowly cheated death as their taxi ran into a roadside ditch. 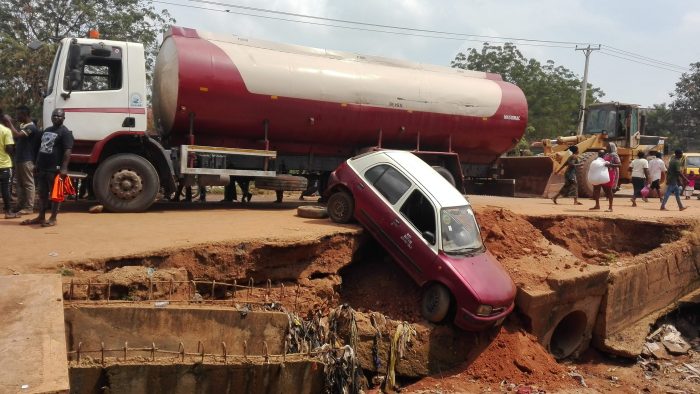 PM News reports that tragedy was averted on Friday, when a fuel tanker and a taxi cab narrowly escaped a head-on collision along the Moniya/Iseyin road, by Akinyele Local Government Council headquarters, Ibadan, Oyo State.

The accident occurred when the Nissan Micra taxi cab, marked Oyo KNH 482 XA and the tanker marked Epe 895 XX, attempted to cross a narrow culvert on the road under construction at the same time.

In an attempt to avoid a head-on collision with the tanker, the taxi driver swerved to his right side and went into the side ditch of the road.

The driver and the five passengers in the cab cheated death by the whiskers, as none of them sustained serious injuries and were helped out of the vehicle.

Contract for the Moniya/Iseyin road was awarded to Olaniran and Company, during the administration of former governor Abiola Ajimobi at the cost of N7 billion, with an upfront payment of N2.5 billion.

But when he resumed office, incumbent governor Engr. Seyi Makinde embarked on an inspection of the road.

He noted that money spent so far by Olaniran and Company was not more than N150 million.

Besides, Makinde said the construction company has no capacity to handle the 70-kilometre road.

He later revoked the contract and re-awarded it to Kopek Construction Company.