A petrol tanker has exploded in a community in Osun state, leaving as many as three buildings in flames. 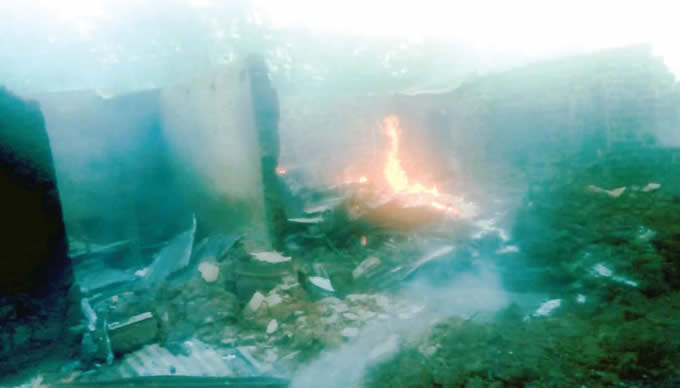 According to Punch Metro, three buildings were razed down in the Ajebandele village, Osun State, on Sunday, as a tanker laden with petrol exploded there.

Investigation by PUNCH Metro revealed that the tank compartment suddenly detached from the vehicle and exploded on the Ife/Ondo Road.

The driver of the truck, it was gathered, ran away with the truck’s head to escape being attacked by the villagers.

A villager, Olatunji Adio, told Punch Metro that the incident happened around 4.30am, adding that the resultant fire raged for about five hours before firefighters extinguished it.

He said three buildings were lost to the fire.

According to him, beside several sacks of dried cocoa belonging to the villagers, which were destroyed, cash and other valuables were also lost to the inferno.

He explained that many travellers plying the road early in the morning were stranded as half of the road was made impassable for hours because of the raging fire.

When contacted, the Administrative Officer of the Osun State Fire Service, Fatai Aremu, said no live was lost to the incident.

He stated, “The fire started around 4.30am. A truck laden with 33,000 litres of petroleum product lost its compartment.

“The driver of the truck obviously ran away with the vehicle’s head to escape possible attack by the villagers. Immediately we received the distress call, we deployed our men in the Ife unit.

“The fire was eventually extinguished. The villagers lost several bags of dried cocoa. They also lost cash and other valuables, but no life was lost.”

Two buildings were also on Sunday gutted by fire in the Ogba and Banana Island areas of Lagos State.

PUNCH Metro gathered that the fire in both locations was caused by power surge from the air conditioners in the affected buildings.

At Ogba, the fire, which razed a building located on No. 25 Oyemekun Street, Ifako, was said to have started from the air conditioner in a studio in a duplex, but emergency responders rescued the situation as casualties were not recorded.

A statement by the Public Relations Officer, Lagos State Emergency Management Agency, Nosa Okunbor, quoted the Chief Executive Officer of the agency, Dr Oluwafemi Oke-Osanyitolu, as saying the prompt arrival of the LASEMA response team to extinguish the fire prevented it from burning down the entire building.

“This level of swift recovery is only made possible due to the reducing response time, which LASEMA is ever mindful of, plus the continuous training of our response teams,” Oke-Osanyintolu was quoted to have said.

Oke-Osanyintolu said the inferno resulted from a power surge that started from air conditioner units, adding that the LASEMA response team was able to curtail the fire before it could spread to other parts of the house.

He attributed the incessant fire incidents in the state to man-made errors and power surges, and urged residents to always disengage domestic appliances from power sources and have fire extinguishers on their premises.

He said, “The simple act of removing the 15-ampere plugs of air conditioning units effectively cuts off electrical power supply from them at the close of work, or when not in use.

“With this simple disconnection from power sources, whether attached to voltage regulators or otherwise, no spark can occur even with the most sudden or powerful electrical surges between an unconnected appliance and an electrical power outlet.”