Nigerians have dragged Tacha for allegedly faking a call with Twitter CEO, Jack Dorsey who recently followed her on the social network platform. 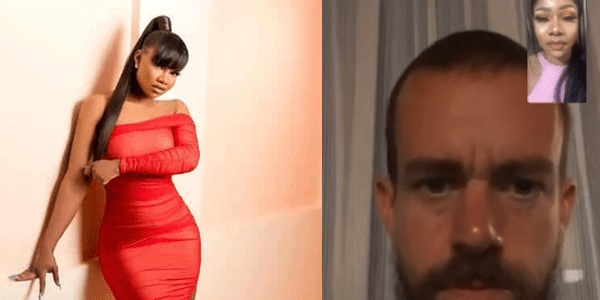 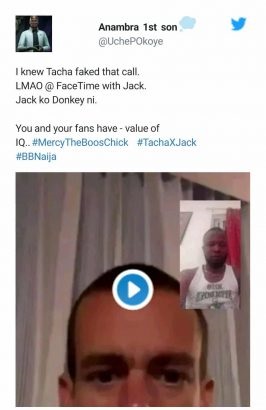 Controversial former Big Brother Naija housemate and Instagram sensation Tacha has been exposed for a fake video call the star earlier claimed to have done with tech guru, Twitter CEO, Jack Dorsey who recently followed her on the social network platform.

Recall that reality Star, Tacha, shared a video of herself on a ‘muted’ video call with Jack Dorsey on Instagram. Tacha wished Jack a happy birthday and praised Twitter for being the best app in the world, and urged Nigerians to use Twitter more often.

That singular act increased the bragging rights of the Titans by a significant magnitude but unbeknownst to them it was all clout.

As some social media users have come out to disprove Tacha’s video call, saying she deceived the public with a sophisticated app and she did it for clout.

Another user also shared a fake video call with the tech guru to justify the claim.