A woman has delivered a baby girl right inside the toilet of a moving train, stunning people. 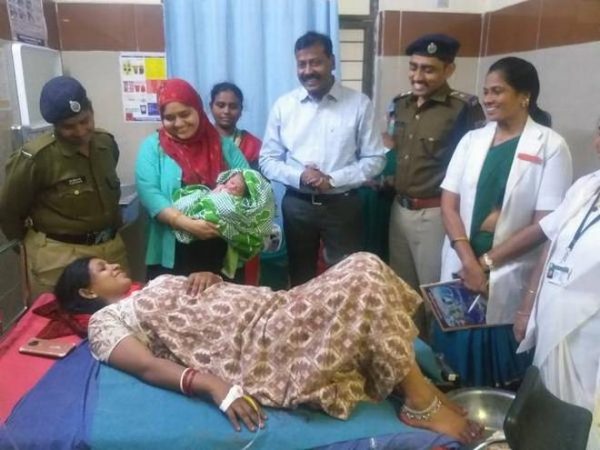 The woman who delivered a baby in a moving train’s toilet with one of her well-wishers holding the baby in hospital . Photo: The Hindu

A pregnant woman passenger she went into the toilet of a fast moving train to answer nature’s call. But while there, she developed labour pains and delivered her baby girl, all alone.

It all happened early Wednesday in India on the Chennai-bound Ganga Kaveri Super-Fast express train.

The 25 year-old woman was identified as Pinky Devi, from Chhapra in Bihar. She delivered her baby at about 5.40 am.

According to The Hindu newspaper, Devi and her baby were found by the cleaning staff on board the train and they quickly alerted the Railway security control room personnel over phone.

In a swift response, the Railway Protection Force (RPF) personnel deployed a woman constable Sashikala, and Childline (1098) volunteers, who promptly attended to the woman and her just born infant soon after the train reached Khammam a little later.

The train was detained at the station for six minutes to facilitate shifting the duo into a 108 ambulance. The ambulance staff rendered first aid to the duo before shifting them to the District Headquarters Hospital for post-natal care.