Babangida recalled that a similar bill was presented before the eighth National Assembly and he advised against. 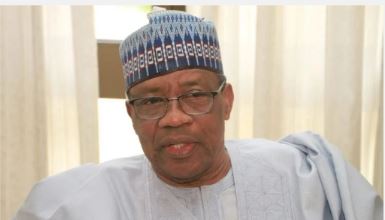 Former military president, General Ibrahim Badamasi Babangida, has weighed in on the controversial Hate Speech Bill, saying nobody can Muzzle Nigerians and deny them freedom of speech.

General Babangida pointed out that there was even no basis for the bill which has passed the second reading in the Senate insisting that no one can deny Nigerians their fundamental rights.

Babangida spoke in his Minna Uphill residence when he received visiting National President of the Nigeria Union of Journalists (NUJ), Chief Christopher Isiguzo.

The Protection from Internet Falsehoods and Manipulation Bill and the National Commission for the Prohibition of Hate Speeches Bill were recently introduced in the Senate.

Babangida recalled that a similar bill was presented before the eighth National Assembly and he advised against.

“I am surprised that this bill has resurfaced. There is no basis for this now. We are developing; we should be allowed to develop. If we make mistakes people can be cautioned. If somebody goes off you have the right to call him to say, ‘no, we don’t want this.’

“Unless people are able to express themselves, those in government or in authority will not know what is happening in the country.”

The former military president said the Bill was an “eye service” by the sponsor, describing the death penalty prescribed in the bill as “crude and wicked

“If somebody makes hate speech, put him in the gallows and not shoot him. It is crude and out of tune with the 21st century reality. It could have happened, may be some 300 years ago, but not now.”

Babangida vowed to team up with the NUJ and other stakeholders in protesting against the passage of the bill saying, “I am with you on this. I will also talk to those of us who could be in position to bring sanity to bare on some of these things.”

The former military president said he had been following media publications on the forthcoming American election, adding, “if we had their type of media, I think they should be jailing you all by now.”

He credited himself with opening up the media space even when some of his colleagues opposed his policy.

“But today, the country is better for it,” he said.

He challenged the media to remain strong and focussed on what Nigerians wants, maintaining that the nation can only succeed if we allow unfettered freedom without death threat or N10 million fine, which he said sounded silly.

Earlier, the NUJ president had solicited the support of the former military president to bring down the bill before the National Assembly.

He described Hate Speech Bill as anti-democracy and anti-people and, therefore, must be killed.

Reacting, legal icon, Chief Afe Babalola (SAN), described the bill as a slide to dictatorship and that there was no need for extra laws in Nigeria.

Babalola, founder of Afe Babalola University, Ado Ekiti (ABUAD), said it was needless and unwarranted for anyone to contemplate another law to deal with false publications when there were laws already promulgated to take care of such situation.

Babalola spoke at ABUAD in Ado Ekiti on Wednesday, when the leadership of NUJ, Ekiti chapter, led by its Chairman, Com Rotimi Ojomoyela presented an award of excellence to the Legal Icon to appreciate his contributions to humanity and national development.

The legal icon noted that the provisions of the proposed bill in its entirety clearly contravene section 39 of the 1999 constitutions, which guarantee freedom of speech.

Lampooning the champions of the bill, Babalola said: “This is the beginning of dictatorship. There are enough laws like defamation, libel, and slander to deal with anybody who publishes falsehood against someone and it comes by way of taking the person to court.

“So, it is of no need to making new laws to deal with somebody who publishes falsehood. There was no need whatsoever for additional laws to deal with that. Though, people are complaining, because the police are not doing well by delaying prosecution of offenders.”

Meanwhile, scores of placard-wielding protesters comprising individuals and civil society organisations, marched on the National Assembly Complex, yesterday, demanding that the Senate drop the bill it is considering to regulate social media in Nigeria.

The protesters started the march at a section of the National Assembly gate when another set moved in through the left flank of the gate. Two groups, Take It Back Movement and Concerned Nigerians, championed the protest.

Aside the primary demand of the Senate stepping down the social media and the hate speech bills, the protesters also asked the Federal Government to obey court orders by releasing Omoyele Sowore and other journalists who are held for critiquing state authorities.

They hoisted placards which among other inscriptions read: “If you can’t stand the smoke. Get out of the kitchen”, “Only a repressive regime muscles the media”, “#SayNoToSocialMediaBill, we are not in tyranny century”,

“If we can’t say what we think, in a democratic society, then it is not democracy”, “Do not gag me”, “Free Sowore”, “It is slavery not to speak one’s thought”, “social media bill another draconian decree”, and “do not gag me.”

The protesters sang songs of solidarity and called out names of each of the 109 senators, chorusing “Shut it down” referring to the two bills, the social media bill and the hate speech bill.

While addressing journalists, Deji Adeyanju, one of the conveners of the protest, said the action would, henceforth, be frequent.

He said apart from the protests, there would be online actions which would involve sending text messages, calling and sending mails to every senator.

He added that this would be followed by “individual name shaming and picketing. We will assign tasks to different members (of our group) to go to their (the senators) homes. Let their children see what their parents are doing.”

He faulted the decision to adopt Singapore’s version of the same bill. He said the Asian country is not a democratic state.

Another leader of the protest, Henry Shield, also chided the legislators for not adopting “progressive bills” like the healthcare bill of the United States and other bills of note that would address the challenges facing Nigerians.

“We insist that the monstrous social media bill and its evil hate speech counterpart have no place in any democratic society, let alone a fledgling democracy like ours. We believe that the bills are satanic and must be totally withdrawn by the ninth Senate with immediate effect.

“As constituents and citizens alike, we believe that the proposed bills suggest that you lawmakers are anti-people and unwilling to either understand the sufferings of Nigerians or even take any meaningful step to mitigate them.

“We, therefore, hope that you will listen to the unanimous voice of Nigerians that these bills have no place in our democracy and must be forever banished to the trash can.”

But Uba Sani (APC, Kaduna Central) and Yakubu Oseni (APC, Kogi Central) spoke on behalf of the Senate said lawmakers would do the bidding of Nigerians.