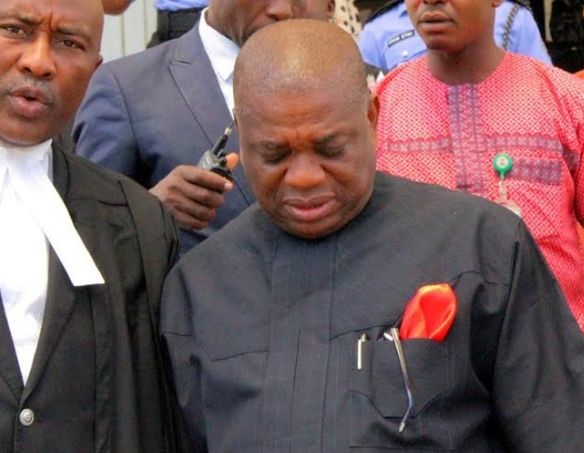 Orji Uzor Kalu
A report by The Nation has revealed the condition of a former governor of Abia state, Orji Uzor Kalu in prison.
The report revealed that the former governor has narrated how he was being fed in the prison.
Recall that the Senate chief whip was sentenced to 12 years imprisonment by a Federal High Court sitting in Lagos over N7.65 billion fraud perpetrated while he held sway as Abia state governor.
Kalu became the governor of Abia state when he was not yet 40 and ruled the state for eight years between 1999 and 2007.
It has been gathered that the reality of his new condition did not dawn on Kalu until some of his associates began to visit him in the prison.
The former governor had asked the prison officials who led him out of the court after the judge pronounced his conviction: “Where are we going now?”
It was gathered that a few days after he landed in prison, one of his business associates was said to have paid him a sympathy visit but was shocked at the pitiable picture cut by the former governor, who was said to be wearing a pair of bathroom slippers.
“See me now eating in the prison,” a pensive Kalu reportedly told his visitor, who struggled to find the words that could console him.
It was also learnt that Kalu's erstwhile colleague as governor, who spent some time in incarceration, also visited him.
The report had it that the flamboyant ex-governor advised him to stay strong and regard his travails as another phase of life.
Top Stories