The PDP chieftain said Nigeria’s future looked bleak as the APC had failed to deliver on its promises. 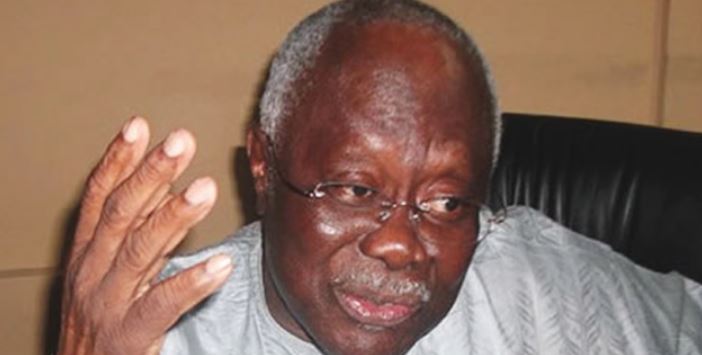 A former Deputy National Chairman of the Peoples Democratic Party, Chief Bode George, has said he will love to contest against the All Progressives Congress chieftain, Asiwaju Bola Tinubu, at the presidential poll in 2023.

George said this during a telephone interview with Saturday PUNCH on Friday.

The PDP chieftain said Nigeria’s future looked bleak as the APC had failed to deliver on its promises.

“I was approached by many people to contest especially now that Bola Tinubu is said to be planning to contest. I have not said yes or no since 2023 is still far. But yes, I will like to contest against Bola Tinubu in 2023,” he added.

The retired naval officer, however, lamented that the PDP had failed to play its role as the main opposition party since 2015.

“The PDP has not lived up to its potential. The APC is also not serious. The APC is (made up of) a bunch of opportunists. Everything is just going bad in the country,” George said.

When asked what would be his primary concern as President, George said he would love to unite the country and ensure economic prosperity for the people.

The former military administrator of Ondo State said the high level of poverty as well as the religious and tribal divisions had brought the nation to its knees, and so his campaign would centre on unity and prosperity.

George added, “The thrust of my campaign will be to unite the country, which is now deeply divided along ethnic and religious lines and that is counter-productive.

“Nigeria had set targets for itself that in 2020, we would be in the top 20 economies in the world but the Vision 20:2020 has since been abandoned.”

The PDP chieftain said the race for the Presidency in 2023 should not be about the wealthiest candidate but those who sincerely had good plans for the nation.

There have been rumours about Tinubu’s plan to contest the Presidency in 2023.

Last month, Abdullahi Umar Farouk, a senior legislative aide to the Speaker of the House of Representatives, Femi Gbajabiamila, said Tinubu would succeed President Muhammadu Buhari in 2023 in recognition of his contribution to the development of the country’s democracy. Farouk, who is a three-time member of the House of Representatives from Kebbi State, stated this at the inauguration of the national executive committee of the Tinubu Media Team, TMT2023.

Earlier on Friday, Special Adviser to George, Mr Uthman Shodipe-Dosunmu, had said the former Deputy National Chairman of the PDP would run for President in 2023.

Shodipe-Dosunmu, in an interview with one of Punch correspondents in Abuja, said a decision had yet to be taken on the party which George would join to contest.

He said he had the authority of George to announce his presidential ambition. George was a one-time PDP Vice-Chairman in the South-West, and PDP Deputy National Chairman (South). He indicated interest to contest the national chairmanship of the party at its convention on December 1, 2017, but Mr Uche Secondus emerged as the winner.

Shodipe-Dosunmu said George was responding to calls by people he called the ‘grandmasters of Nigerian politics’.

He said, “It is correct that Chief Bode George wants to contest the 2023 presidency. Chief George is a former Governor of Ondo State. He is an experienced person. He is totally detribalised. He is uninterested in sectarian leanings. He is more than qualified, given his profession, competence and experience.

“The grandmasters of Nigerian politics from all over are the ones that said, ‘This is the man that we want now. He is a detribalised person, a non-sectarian person, and a fulfilled person. He has accepted the call by the grandmasters.’”

Shodipe-Dosunmu, who is Director-General of Pathfinder Consortium, said the group was formed to seek support for and campaign for the candidacy of George.