A pastor who killed a LASU student for money ritual has said he's ready to die for his heinous act. 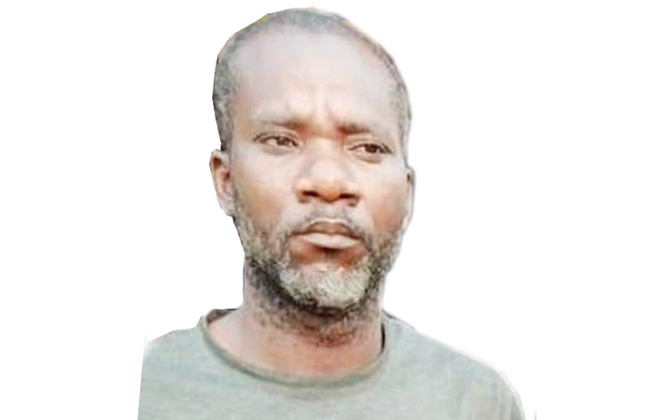 Segun Phillips
The self-acclaimed Osun-based pastor, Segun Philips, who reportedly slaughtered a final-year student of Lagos State University, Favour Daley-Oladele, after her head was smashed by her boyfriend, has told Punch's DAUD OLATUNJI how the incident played out.
He also said that he's ready to pay with his life of the dastardly act.
Read the interview below:
Do you really have a church?
I’m 42 years old and I’m from Osun State. I live in Ikoyi-Ile. I am a prophet. I have a church – Cherubim and Seraphim Church, Solution chapel in Ikoyi-Ile, Osun State.
How did you become a pastor?
I was trained at Elmessiah Cherubim and Seraphim at Sango. I was called by God, but I think I have deviated from my calling and that was why I involved myself in all these atrocities.
How many children do you have?
I have two children, one male and one female.
What was your role in the killing of Favour?
We wanted to perform money ritual for Owolabi’s mother without her knowledge. The agreement was between me and her son; we agreed to do it for her and we promised never to let her know the source of the money.
But the money ritual we wanted to perform required human body parts for it to work. He (Owolabi) asked me where we could get body parts of a human being and I told him I didn’t know because that was the first time I would be performing such. I told him that he was the one that would get the human being to be used for the ritual. Owolabi agreed to bring his girlfriend and when he brought the girlfriend, we killed her and removed all we needed from her. What I removed were the head, heart, breasts and hands. We used all these parts to prepare a concoction for Owolabi’s mother but she did not know that they were human body parts.
We deceived her; we told her we would need to make a sacrifice and that she would need to feed people. I told her that the heart and vital organs of a goat would be used to make a concoction for her to eat.  She never knew what we gave her to eat were human body parts and nobody told her until we were caught.
So you slaughtered the lady…
Yes, it is true. I was the one who slaughtered the lady and removed all the necessary things we needed from her body.
How many people have you done money ritual for?
This was my first time. I told Owolabi when he came to me that I had not done something like that before.
So who taught you how to perform money ritual using human body parts?
It was Sunday Obasioni that taught me how to use human body parts for money ritual. He taught me when I was still a trainee under him. He told me not to teach anyone, and because I was an illiterate, I used my phone to record how he explained that I would go about it and it was the recording I used when I wanted to do it for Owolabi’s mother.
How will you feel if they do the same for your daughter?
I will feel bad and take a very drastic action to ensure the culprits are brought to justice. And because of the proverb that says, ‘Your children would suffer for the wrongs you have done’, I already know my daughter may also face the same fate in the coming years.
Do you have any regrets?
From the first day we performed the money ritual, I have regretted doing something like that. I blamed myself after the incident for engaging in such a wicked act.
Since you knew it was wrong, why did you do it?
I did it because I was broke and needed money. I didn’t have money and when they brought the business, I agreed because of the money involved.
Since you were broke, why didn’t you do consider performing money ritual for yourself?
When Sunday Obasioni taught me how to perform such a ritual, he said I could not do it for myself, people close to me or members of my congregation. He said I could only perform such a ritual for people faraway from me. I did it for Owolabi because he came from somewhere far from here.
Has any family member visited you since you have been arrested?
Nobody wants to associate with me because they heard about the heinous act I committed. I want the government to have mercy on me.  I know I have left God’s way and chosen the path of the devil. I know I have dined with the devil and must face the wrath of justice for my action. I’m a disgrace to priesthood and many have sinned because of me.
I want them to forgive me so that I can start afresh and become a good evangelist who would preach the gospel of Gospel. I know the sentence that will be passed on me for murdering someone is death. Since that is the law of the country, I am ready to face the death penalty for what I did.
Top Stories