Lagos State University has postponed examinations after students of the school were injured during a stampede. 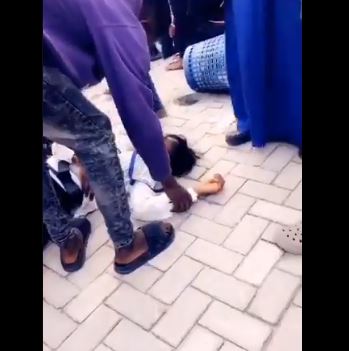 Students faint during the incident
The Lagos State University has confirmed that one of its students injured in a stampede that occurred on Monday is currently hospitalised, according to a report by Punch.
Recall that about six students were injured in a stampede that occurred at the Lagos State University on Monday.
It was learnt that the stampede happened during a GNS 102 examination at the new ICT centre, near the Faculty of Management Sciences of the university.
The LASU Coordinator, Centre for Information Press and Public Relations, Ademola Adekoya, in a statement on Monday, said the examination had been postponed.
The statement read, “On the unfortunate incident of a stampede involving some 100 Level students of the Lagos State University, which occurred as they wrote the GNS 102 examination on Monday, 6th January 2019, the University wishes to state as follows, that:
“100-level students were scheduled to write the GNS 102 Examination on Monday 6th and Tuesday, 7th January 2019, between 8am- 2pm daily;
“The students were scheduled to write the exam in batches, each batch spending an hour in the CBT hall; the arrangement would have seen the students write in six batches on the first day;
“Anxious to be among the earlier set, quite a number of the students attempted to force their way into the 500 seats CBT Centre in defiance of the efforts of the Security Team to maintain order;
“That resulted in a stampede that caused some of them to faint while a few others sustained minor injuries;
“The affected students were promptly rushed to the University Health Centre and the Igando General Hospital for proper treatment. Only one of the injured is still being treated at the General Hospital.
“The GNS examination has now been rescheduled to take place on Wednesday, 8th and Thursday 9th January 2019, at the CBT Centre and the Language Laboratory, Faculty of Arts, Main Campus, Ojo. Each student will also be allotted specific time to appear and sit for the examination;
“The University regrets the unfortunate incidence and is determined to put measures in place to avoid a recurrence in the future.”
Watch video below: