The Nigerian Army have decided to look into alleged extortion after the Borno state Gov Babagana Zulum raised alarm yesterday. 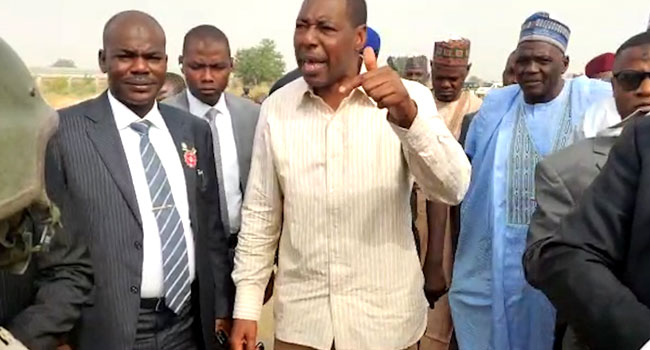 The Nigerian Army Headquarters has promised to carry out thorough investigation into the allegation of extortion of commuters by its personnel in Borno with a view to sanction them.

This followed an allegation by Gov. Babagana Zulum of Borno on Monday when he encountered an incident at a military checkpoint along Damaturu-Maiduguri road.

The governor was reported to have accused soldiers of Operation LAFIYA DOLE deployed along Maiduguri–Damaturu Road of extorting commuters and causing them unnecessary hardship.

The Nigerian Army Operations Media Coordinator, Col. Aminu Iliyasu, in a statement on Tuesday, said that Nigerian army as a professional and disciplined institution viewed such allegations seriously, particularly coming from a governor.

According to him, it is on record that, whenever such allegations of troops’ misconduct were made in the past, the Nigerian Army never reneged in conducting thorough investigations to establish them.

“Where any infractions were established against any personnel, appropriate sanctions were applied in line with extant rules and regulations as provided for in the Armed Forces Act CAP A20 Laws of the Federation of Nigeria.

“Thus, the Nigerian Army wishes to assure the good people of Borno State and indeed the nation at large that any allegations of misconduct against its troops will be duly investigated and culprits will be dealt with accordingly,” he said.

Iliyasu said that army authorities had however observed that such public outburst particularly by a state governor could be counterproductive.

He added that such outburst was capable of reversing the gains recorded so far in the ongoing fight against insurgents and other criminal elements across the nation.

“The Nigerian Army wishes to emphatically reiterate its steadfastness on the protection of lives, properties of all law abiding citizens as it is committed to wiping out insurgency in the North East and other forms of criminality across the country.

“Any observed misconduct by troops could be reported directly through a toll – free code 193 for immediate remedy,” he said.