He said the fire outbreaks were caused mainly by carelessness in the use of electrical appliances and ignorance about handling of naked fires. 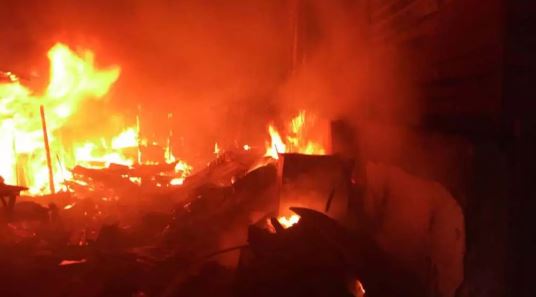 The Kaduna State Fire Service said on Wednesday that it recorded 523 fire outbreaks and 65 deaths in the state between January and December 2019.

Mr Paul Aboi, the state Director of Fire Service, disclosed this in an interview with the News Agency of Nigeria (NAN) in Kaduna. He and said the incidences were recorded in Kaduna, Zaria and Kafanchan zones.

He said the fire outbreaks were caused mainly by carelessness in the use of electrical appliances and ignorance about handling of naked fires.

Aboi said that December period recorded the highest incidences of fire with 69 outbreaks followed by the months of January 74, February 65, March 67 and April 61.

“The high rate of fire outbreak is usually from December till April because the period is the core dry season,” he said.

He stated that in the course of responding to fire distress calls, the office rescued 63 persons alive, 141 injured while 65 persons died.

Aboi said the service was doing its best to reduce and bring fire disasters in the state to the barest minimum.

“The efforts of the Kaduna State Fire Service saved the state over N199 billion worth of goods while properties destroyed are estimated at N58 billion from over 523 fire outbreaks in the state between January and December 2019.

“Carelessness of residents is a major cause. i hope that the advocacy programme being embarked upon by the state government will help correct the anomaly and ultimately reduce fire incidents to the barest minimum,” he said.

The director advised residents to take preventive measures against fire outbreaks seriously, saying the only language fire understands is prevention.

“Fire Prevention Unit of the service has been going to houses, offices, schools, markets and worship centres to sensitise people to fire preventive measures and what to do in case of outbreak,” he said.

He advised people to always call the service first any time there was fire outbreak, as “calling fire service after battling fire outbreak unsuccessfully would cause more damage and total destruction to property”.

The director, however, commended residents for not attacking fire fighting personnel and trucks when they arrive at fire scenes.

He warned residents to be careful during the dry season as the period was prone to fire disaster, saying fire usually rage out of control during the period.