Junior Pope also maintained that in 2020, he hoped to produce his own movies instead of always working for other people. 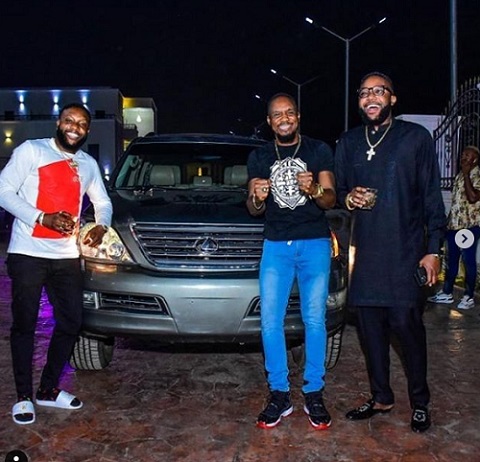 Actor, Pope Odonwodo, popularly known as Junior Pope, has obviously started the year on a high note. Days ago, he was given a Lexus jeep Gx-470 as a gift by Five Star Music boss and a known huge spender, Emeka Okonkwo, aka E-Money.

The actor had then taken to Instagram to thank E-Money for the gift. However, while many of his fans congratulated him and thanked E-Money for his generosity, some insinuated that it could have been a publicity stunt or that Pope begged for the gift.

Tearing those claims to shreds, Pope told Sunday Scoop, “Why would I do that? I have three cars of my own. I wasn’t even expecting the gift when it came. We have been friends for some years and he has always said that he likes the way I love my family. Then, all of a sudden, this came. It was actually a gift for my second son, who is E-Money’s godson. He turned three years old recently. I guess it was a birthday gift of sorts for the boy.

“Anyway, people can say whatever balderdash they like; I don’t care.”

On the issue of giveaways which has become a hot topic online, with some entertainers saying that some fans had become entitled and always demanded for it, Junior Pope said the practice wasn’t compulsory.

He stated, “Every Monday (weekly), I give out airtime vouchers to my followers on social media and it has even become some sort of ritual. But I am not mandated to do that, though some fans make it seem like it is their right to get such giveaways. It is at a celebrity’s discretion to do giveaways because it is the person’s money. We all know that Nigeria is tough but the fans shouldn’t take it out on celebs.”

Junior Pope also maintained that in 2020, he hoped to produce his own movies instead of always working for other people. He said, “This year, I’m looking forward to producing more of my own movies. I have worked so much for others; I think it’s high time I started working for myself.”