The Peoples Democratic Party has been attacked by an Islamic group for lambasting Buhari's daughter for using presidential jet for private business. 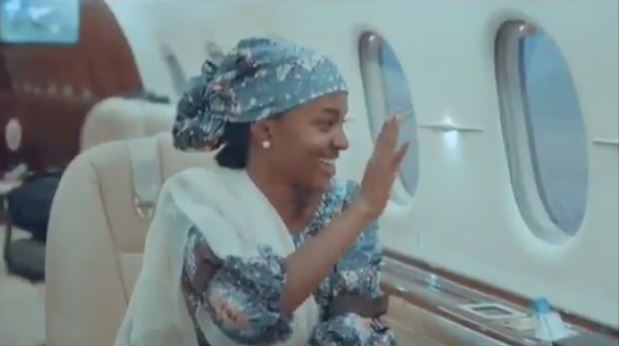 Hanan Buhari waving inside private jet
The Muslim Rights Concern (MURIC) has attacked those criticizing Hanan Buhari, the president’s daughter over the use of the presidential jet.
Hanan, a first-class graduate in photography had used the presidential jet while honoring an invite to the Durbar by Rilwanu Adamu, Emir of Bauchi, on Thursday.
However, the act got her a lot insult from Nigerians, who frowned at the choice of her flying a presidential jet for her personal business.
But, MURIC in a statement signed by its director, Professor Ishaq Akintola, on Monday sent to DAILY POST defended the president’s daughter’s action.
According to the Muslim Rights Concern (MURIC), critics are just making a mountain out of a molehill.
Recall that the Peoples Democratic Party (PDP) on Saturday stated that President Muhammadu Buhari directly abused his office and exhibited the worst form of corruption by detailing the officially restricted Presidential jet to chauffeur his daughter, Hanan, for her private photography event in Bauchi state.
The group lashed out at critics, describing them as ‘petty, mean and most uncharitable.’, adding that Hannan’s invite by the Emir of Bauchi is not a private event.
MURIC urged politicians to desist from politics of negativism and encouraged Nigerians to see Buhai’s daughter as an inspiration to youths.
The statement read: “An emirate has shown keen interest in the uncommon skill of the president’s daughter. The emirate therefore invited her to demonstrate the skill at a public function. So how private is a private function? Those who described the occasion as personal to Hanan are petty, mean and most uncharitable.
“How private is private? Are we saying that the traditional institution is inconsequential? What happened to our respect for our norms and values? Are we to assume that our system no longer recognises the traditional institution? If so, why do governors still appoint emirs, obis and obas? If the law of the land still recognises traditional rulers, Hanan’s invitation to Bauchi cannot be rightly described as a private affair.
“Besides, that function passed a strong message to Nigerian youths, especially the Nigerian girl-child. It poses a challenge to them to eschew laziness. More importantly, it underlines the significance and relevance of every aspect of human knowledge. This is a very important message wailers missed.
“An intelligent and objective observer will see beyond the use of a presidential jet. Well, only the deep can call to the deep. We all know that Nigerians will give their right eyes to secure admission for their children to read choice courses like medicine, law, accounting, banking and finance, etc.
“They pay little attention and give complex to those reading what they regard as ‘low profile’ courses like theater arts, education, religion, photography, etc.
“Hanan Buhari has challenged the status quo. She read photography and made first class. We salute her. She has done the Nigerian girl-child proud. She elevated a ‘low profile’ course thus raising the spirit of those poor students reading similar courses.
“We have chosen to address the tangential, not the peripheral. What’s in a presidential jet when the dreams of thousands of Nigerian students have been rekindled?
Hanan Buhari is saying, ‘Stop looking down on those who read less glamorous courses. Stop despising artists. They are the gem of the collection’. Therefore, Hanan Buhari symbolises courage, hope and success. Instead of criminalising her action, wailers should realise that she has elected to inspire Nigerian youths to be hopeful and hardworking.
“Besides, President Buhari should not be guillotined for permitting her daughter’s use of the jet. Afterall, it was not for any frivolous jamboree like shopping in Dubai. We may want to ignore the excesses of past landlords of Aso Rock to justify PMB’s action. But it is on record that some first ladies actually excelled Marie Antoinette, wife of Louis XVI in extravagance. Whereas PMB exhibited prudence each time he attended the United Nations’ events, we know those who went with about 150 in tow, brandishing pomp and pageantry on the streets of Washingon DC to the consternation of other delegates. We know past presidents who gave out presidential jets to their cronies and praise-singers, their aourt jesters and bootlickers. But we will not descent to that petty level.
“It amounts to overzealouness on the part of critics to grab every little straw and make mountains out of mole hills. They are simply trying to draw the attention of Nigerians away from PMB’s monumental achievements simply because they were merely looking for the president’s faults.
“We appeal to politicians to change from politics of negativity, retardation and destruction to positivism, patriotism and constructive engagement. It is not everything that political opponents do that we must sensationalise and demonise. It raises true democrats above the herd to appreciate good things in the opponent.
“As we drop the anchor, we appeal to Nigerians to ignore the razzmatazz in the presidential jet furore. Rather, attention should be given to the lessons inherent in Hanan Buhari’s outing. We call on Nigerian youth to see light at the end of the tunnel. There is a bright future for those who face their studies and vocations no matter what field. Politicians should desist from politics of negativism.”
Meanwhile, Buhari’s Spokesman, Garba reacting to the outrage on social media, said it is normal practice for the president’s family to use the presidential aircraft.
Top Stories