Hilarious! Customers Charged At US Restaurant For Asking Stupid Questions


A US restaurant has decided to charge its customers for asking ignorant and stupid questions. 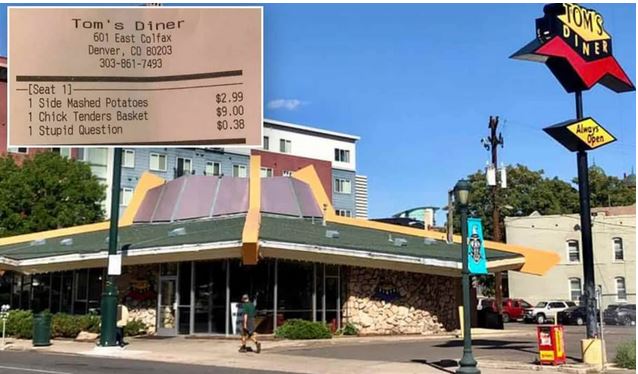 A US restaurant has gone viral for charging customers for asking “a stupid question” during the meal.

A customer who did not reveal the “stupid question” he asked shared a receipt from the US restaurant, Tom’s Diner in Denver on social media and it reveals he was billed $0.38 for 1 stupid Question along with other items, ‘1 Side Mashed Potatoes $2.99, 1 Chick Tenders Basket $9.00.’

The aim is to make customers think before asking something silly, patronising or downright stupid while at the restaurant, Metro reports.

“It’s just a bit of fun. It’s funny and lighthearted and is just meant to make the customers smile. We have lots of silly things on our menu like that.” 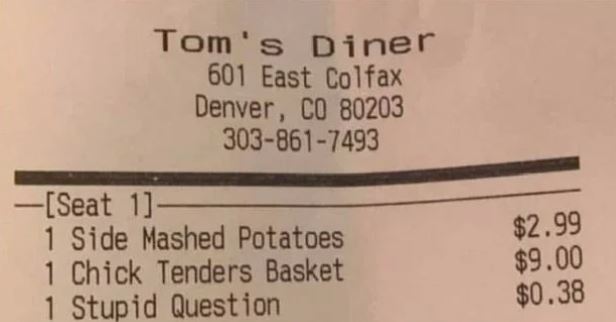 ‘If I got paid to listen to people’s stupid questions I’d probably be a billionaire,’ one person wrote.

Another user added: ‘They charge you 38 cents? S—, if I charged for every stupid question I was asked, I’d be f—–[g] rich,’ and another person commented, ‘Omg I love Tom’s diner!!’

According to the restaurant’s manager, Hunter Landry, one of the favorite questions he loves to charge for is: “Does the ice have any water in it?”

An ex-employee said: “A lot of times, customers would be disappointed at not being charged for asking a stupid question so they’d ask and a server would then add it.”